To Pair with Peaches: Summer Reading 2017 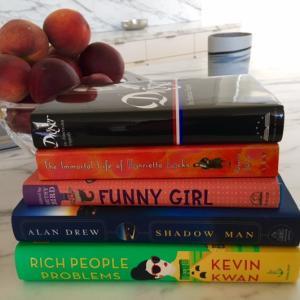 Recent discovery: When you’re writing a book, you have less time to read. Nevertheless, it’s summer! Prime time for book reading. So here are some options for the beach, your commute, or when you really need your mind taken off things because your flight is delayed -- again. Please note: all of these pair well with peaches and it's that time, too…

I discovered Louise Penny in January and straightaway ripped through all 12 of the mysteries in the series, beginning with Still Lifethrough A Great Reckoning, plus the novella, The Hangman. I anxiously await lucky #13, Glass Houses, due later this year. These are the kind of books that, upon opening, you slip between the pages and fully inhabit the story. It’s a form of magic very few writers can conjure. My fondest wish would be to apparate from my high-rise apartment on the shore of Lake Michigan to live among the characters in the village of Three Pines, a hamlet in the province of Quebec, Canada, where most of the books are set. It would be a good life – a lovely used bookstore, good food, fireplaces, charming gardens – but, alas, a penchant for violent crime and no internet. I should also mention, aside from the wonderfully drawn characters and setting, the books are well-plotted and Penny’s use of poetry as local color, character flourish, and plot device is an added attraction.

When librarian extraordinaire Betsy Bird realized there were plenty of joke books out there, but nada funny stories for funny girls written by funny women, she decided that was a situation to be rectified. Voila: Short stories, comics, pop quizzes and Mad Libs from 25 – make that 26, to include the editor herself – of the funniest best-selling authors around. When my friend, Sarah Chadwick, gave her 11-year-old son, Rawdie, this book, he was a bit skeptical. “Is it about girls?” he asked.  “I think it has lots of girl characters in it, but really it’s about humour,” said Sarah.  Half an hour later, Rawdie reported, “That book’s going to be OK. I read the first few pages and it’s funny.”  That’s high praise in boy-speak. Funny Girlis the book all parents have been looking for when their children enter the joke-telling phase of development somewhere between 8 and 13. Though those ages are not a requirement, it’s for boys and girls, young and old. Knock, knock…

A light and easy read in the hallowed tradition of summer novels, because who isn’t fascinated by the private school admission process? Especially when it’s told through the saga of a charming 20-something grad school-dropout looking to find her way off the couch after a disastrous breakup. The high-stakes world of Hudson Prep admissions may be the framework for this story, but it’s really about rejection in love andacademe and the acceptance that comes from finding oneself. As for authenticity, it's a little hysterical, but I imagine the author had to exaggerate to separate herself from the narrative: she worked in private school admissions in the heart of darkness, NYC. Rated HE for Highly Entertaining.

Yep, the third book from the author of bestsellers Crazy Rich Asians (soon to be a major motion picture!) and China Rich Girlfriend, is just as good as you’d hoped it would be.  The gold diggers, the diamonds, the designers and the food – both thrown and consumed. And I’m only about 70 pages in…

My aversion to reading bestsellers is the reason for only now getting around to this excellent book. This is probably not news but Skloot has a gift for making complex storytelling compelling and a rarer gift for explaining the scientific. I’m reading slowly and savoring.

A Wrinkle in Time by Madeleine L’Engle

Because I’m feeling nostalgic for the summer reading days of my youth. I can still tell you exactly on which shelf this book was filed in the Sterling Public Library. Also, there will be a movie next year.

An American Tragedy by Theodore Dreiser

Because Dreiser’s work has a strong nostalgic pull, as well, especially by way of the parallels to the city of big shoulders in the present day, Chicago.

Too empty, boring, and badly written to even write about. Skip it.

City of Friends by Joanna Trollope

Hasn’t this been done before? And better? Try I Don’t Know How She Does It by Allison Pearson.

How to Fall in Love With Anyone by Mandy Len Catron

Catron penned the NY Times piece about the 36 questions that will make someone fall in love. My daughter uses these on first dates; she finds they also work to disqualify a guy. I find they work when I’m interviewing subjects. Looking forward to reading what she has in mind here.

The Address by Fiona Davis

Because I loved Davis’ The Dollhouse set in New York’s Barbizon Hotel and am just as fascinated by the apartment house, The Dakota.

The Late Show by Michael Connelly

Because it's also not summer without a mystery by Connelly, the grand master of the genre, this time with a new protagonist, Renee Ballard. FYI, Connelly writes really interesting, complicated women.