Design on a Grand Scale 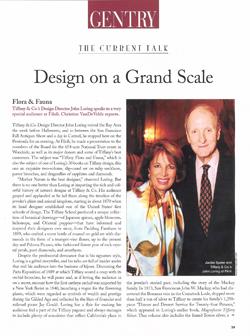 Tiffany & Co. Design Director John Loring visited the Bay area the week before Halloween and in between the San Francisco Fall Antiques Show and a day in Carmel, he stopped here on the Peninsula for an evening. At Filoli, he made a presentation to the members of the Board for the 654-acre National Trust estate in Woodside, as well as its major donors and some of Tiffany's best customers. The subject was "Tiffany Flora and Fauna," which is also the subject of one of Loring's twenty books on Tiffany design, this one an exquisite two-volume slipcased set on tulip necklaces, parrot brooches and dragonflies of sapphires and diamonds.

"Mother Nature is the best designer," observed Loring. But there is no one better than Loring at imparting the rich and colorful history of nature's design at Tiffany & Co. His audience gasped and applauded as he lead them along the timeline of the jeweler's plant and animal kingdom, starting in about 1870 when its head designer established one of the United States' first schools of design. The Tiffany School produced a unique collection of botanical drawings – of Japanese quince, apple blossoms, heliotrope and Oriental poppies -- that have informed and inspired their designers ever since, from Paulding Farnham in 1889 who crafted a scent bottle of enamel on gold set with diamonds in the form of a trumpet-vine flower up to the present day and Paloma Picasso who fashioned flower pins of rock crystal petals, pave diamonds and amethysts.

Despite the professorial demeanor that is his signature style, Loring is a gifted storyteller and his talks are full of insider asides that reel his audience into the business of bijoux. Discussing the Paris Exposition of 1889 at which Tiffany scored a coup with its orchid brooches, he will pause and, as if letting the audience in on a secret, recount how the first cattleya orchid was imported by a New York florist in 1840, launching a vogue for the flowering plants, which were regarded as symbols of wealth and prestige during the Gilded Age, collected by the likes of financier and railroad pirate Jay Gould. Loring has a flair for making his audience feel a part of the Tiffany pageant and always manages to include plenty of anecdotes that reflect California's place in the jeweler's storied past, including the tale of the Mackay family. In 1873, San Franciscan John W. Mackay, who had discovered the Bonanza vein in the Comstock Lode, shipped more than half a ton of silver to Tiffany to create his family's 1,250-piece "Dinner and Dessert Service for Twenty-four Persons," which appeared in Loring's earlier book, Magnificent Tiffany Silver. That volume also includes the famed Bourn silver, a 581-piece Tiffany service now housed at Filoli and on display this evening in the mansion's ballroom.

The world of ivory frog inkstands and jade pea pod clips might not sound like it requires the tenacity of a treasure hunter, but Tiffany's jeweled legacies have a way of disappearing into family vaults – or attics. Their Orchid Vase of 1889, which Loring describes as "a monument of silversmithing," won a gold medal at the Paris Exposition and then "dropped off the face of the earth." Every museum director in the world was on the lookout for it, when Loring received a call from the director of the Hearst Castle in San Simeon, saying that he didn't have an orchid vase, but he had an ugly silver orchid lamp. At some point, someone had turned the famed piece into a lamp and it had been sitting on the piano in the Hearst Castle for years as visitors streamed by. It was returned to Tiffany and restored to its former glory.

As Design Director, Loring is responsible for every single thing that Tiffany & Co. sells – from its iconic diamond engagement rings and lead crystal candlesticks to the Tiffany Mark watch and silver baby cups. Tiffany's 2005 sales were $2.4 billion – a testament to his unerring eye.  An artist in his own right, his paintings and prints are in the permanent collections of the Museum of Modern Art, the Whitney, and the Art Institute of Chicago, among others. Early in his career, he taught at UC Davis where future megastar artists Wayne Thiebaud and David Gilhooly were among his students. Loring's unique combination of the pragmatic and the artistic has staked the careers of designers like Elsa Peretti and Paloma Picasso and brought the American public the iconic Tiffany heart bracelet, Diamonds by the Yard, the bottle pendant and the bone cuff.

After concluding his talk of Lady Bird Johnson's Tiffany-designed wildflower china and Schlumberger's love of the idiosyncratic in nature, Loring lead his acolytes along candlelit paths amid Filoli's 16 acres of formal gardens to the former residence of the Bourn family, who owned the Empire Mine, a hard-rock gold mine in the Grass Valley. Over cocktails in the ballroom, Tiffany's arbiter of taste demonstrates why he is so in demand from the Bay area to Fifth Avenue. With all the elegance of a man from another era, the six-foot four inch Loring meets and greets his way around the ballroom with the kind of charm that makes him seem at home anywhere and most happy to be here in Woodside discussing Montana sapphires and silver seed pod boxes on this fall evening.