The Stage Was Set 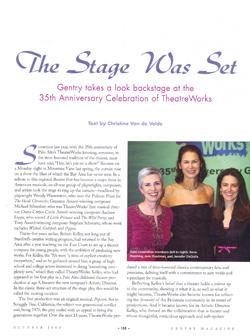 Sometime last year, with the 35th anniversary of Palo Alto's TheatreWorks looming, someone, in the time-honored tradition of the theatre, must have said, "Hey, let's put on a show!" Because on a Monday night in Mountain View last January, the curtain rose on a show the likes of which the Bay area has never seen. In a tribute to this regional theatre that has become a major force in American musicals, an all-star group of playwrights, composers and artists took the stage to ring up the curtain -- headlined by playwright Wendy Wasserstein who won the Pulitzer Prize for The Heidi Chronicles; Grammy Award-winning composer Michael Silversher, who was TheatreWorks' first musical director; Outer Critics Circle Award-winning composer Andrew Lippa who scored A Little Princess and The Wild Party; and Tony Award-winning composer Stephen Schwartz whose work includes Wicked, Godspell, and Pippin.

Thirty-five years earlier, Robert Kelley, not long out of Stanford's creative writing program, had returned to the Bay area after a year teaching on the East Coast to set up a theatre company for young people, with the ambition of producing new works. For Kelley, the '70s were "a time of explicit creativity everywhere" and so he gathered around him a group of high school and college actors interested in doing "something completely new," which they called TheatreWorks. Kelley, who had appeared in his first play in a Palo Alto children's theatre production at age 8, became the new company's Artistic Director. In the classic three-act structure of the stage play, this would be called the inciting incident.

The first production was an original musical, "Popcorn." Set in Scraggly Tree, California, the subject was generational conflict and, being 1970, the play ended with an appeal to bring the generations together. Over the next fifteen years, TheatreWorks produced a mix of time-honored classics, contemporary hits and premieres, defining itself with a commitment to new works and a penchant for musicals.

Reflecting Kelley's belief that a theatre holds a mirror up to the community, showing it what it is, as well as what it might become, TheatreWorks also became known for reflecting the diversity of the Peninsula community in its roster of productions. And it became known for its Artistic Director, Kelley, who thrived on the collaboration that is theatre and whose thoughtful, meticulous approach and soft-spoken manner became a draw for actors. By 1984, it was a small, non-professional company with an annual budget of about $300,000. This was no mean feat. As New York Times theatre critic Howard Taubman once wrote, "It is the destiny of the theatre nearly everywhere and in every period to struggle even when it is flourishing."

Enter right, Randy Adams, at the beginning of TheatreWorks' second act (where, as all good playgoers know, the story unfolds). Tall and affable, with a smile that makes you think of Puck and just a hint of a Southern drawl, Adams arrived at the end of 1984 to take on the role of Managing Director, responsible for the front of the house -- fund-raising, marketing, finance, education and long-range planning. It was the beginning of a beautiful friendship. Adams is the producer -- optimistic, energetic, good-natured and full of fun, he knows how to play a hunch because he knows the game better than anyone else at the table. Kelley is the director -- paternal, focused, and a risk-taker, he is a natural collaborator who never loses sight of the big picture. Under their guidance, over the next ten years, the youth company became a professional company. But it was in some ways still a well-kept secret.

As the millennium approached, the company's Board of Trustees began a yearlong process of strategic planning. During that time, Board member Marcia Goldman asked Kelley to define his number one priority for TheatreWorks. "The first thing he said was that TheatreWorks would be alive and well long after he wasn't," she remembers. "And the second thing was that we would be known not only for being daring enough to do new works, but a safe place to create new works. From that moment on, it changed the course of how TheatreWorks thought and what it was becoming." And so began Act Three in the tale of TheatreWorks, where all is resolved.

"We needed to be on the other end of the cycle, not sitting around waiting for the right thing coming out of New York. We needed to be creating these things," recalls Adams. So, the New Works Initiative was formed to provide composers and writers opportunities to develop work, culminating in a two week festival of staged readings, workshops and main stage world premieres. In addition, an annual Writer's Retreat, modeled after the Sundance Institute Theater Laboratory, provides teams of collaborators with cars, housing, a stipend, actors, crew and workspace for projects in all stages of development.

"And it didn't take very long once we put the program in place to attract some really high-profile people," said Adams. Meanwhile, the world where shows were developed outside of Broadway was shifting on its axis. Out of town tryouts in places like New Haven and Boston had become too expensive. Regional theatres became the cradles for new productions -- TheatreWorks chief among them. Today, you can pick up any Sunday New York Times and scan the show listings and you'll find more often than not that the composers and writers have links back to Palo Alto -- including the creative forces behind Summer of '42, Wicked, Memphis and Everything's Ducky, as well as the upcoming Betty Boop, Jerry Christmas and My Man Godfrey.

While the New Works Initiative and Writer's Retreat develop work other than musicals, it is new musicals that TheatreWorks has become known for. Of the 45 or more world premieres TheatreWorks has staged, most have been musicals. The importance of TheatreWorks to this quintessential American art form -- think Hair, Oklahoma, Guys and Dolls, Gypsy, Chicago -- and to Broadway can't be over-stated, just ask Variety. Musicals are vast enterprises and five times more costly than plays. While a play takes a year or two to develop, musicals take seven or eight years. Musicals are what has put TheatreWorks on the map. And musicals, says former Board member Terri Tiffany, are "what will win TheatreWorks a Tony award for best regional theatre sometime in the next five years."

Today, TheatreWorks is a prestigious professional company with a budget of $6.5 million. "The major theatrical forces in the world are coming to TheatreWorks," says Adams. Next year, the company will premiere two musicals -- Harold and Maude by Tom Jones and Joseph Thalken and Pamela's First Musical by Wendy Wasserstein and the late Cy Coleman -- as well as stage Sarah Ruhl's The Clean House, which was short-listed for the Pulitzer Prize. "The kind of interest that we get nationally is amazing. Because people know this is where it's happening," says Tiffany. "Composers and lyricists who have come to Palo Alto to grow their musicals have become lifelong supporters and believers in our mission."

Which is how it came to pass that last January a lineup of composers, playwrights and artists put on a show that knocked the socks off the audience… and founder Robert Kelley himself. At intermission, Kelley was called to the stage to join Managing Director Randy Adams, who stunned Kelley with the announcement of a $1 million gift from Ann Bowers and John and Marcia Goldman establishing "Kelley's Popcorn Fund." Named after Kelley's first original musical for TheatreWorks, the fund will be used to develop and mount new plays and musicals.

"The director needs to know what's going on," remembers Kelley. "And when I was brought to the stage, I was off script. The audience was full of people who had made contributions of their own and not just money, but from their lives, and it was overwhelming. I was speechless." He did recover in time, however, just before the curtain rose on the second half of the evening, to announce that an anonymous donor had popped the Popcorn Fund by another $1 million during intermission. In the time-honored tradition of improvisation that we associate with great theatre, Kelley says that he actually found himself capable of one lucid thought at that point, "Maybe we should take another intermission." And that is what they call a happy ending.

The Event: One Night Only, TheatreWorks' 35th Anniversary Gala Benefit, began with a black-tie dinner hosted by Fenwick & West LLP, followed by a tour de force musical retrospective on the stage of the Mountain View Center for Performing Arts. A champagne reception with guest composers and artists followed.

The Program: Celebrating the Spark of Musical Creation, a special presentation of works from the repertoire of the Guests of Honor, as well as a retrospective of new works presented over the thirty-five years of TheatreWorks, produced by Managing Director Randy Adams and Ev Shiro.

The Final Word: "For years I have been telling my parents and my agents that my one source of unconditional love is TheatreWorks," declared Wendy Wasserstein.