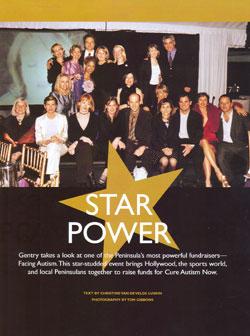 Gentry takes a look at one of the Peninsula’s most powerful fundraisers -- Facing Autism. This star-studded evening brings Hollywood, the sports world, and local Peninsulans together to raise funds for Cure Autism Now.

Four years ago, Marva Hanks, the wife of former San Francisco 49er Merton Hanks, told her good friend Nanci Fredkin there was someone she wanted her to meet. This man, she said, was going to change the world. And he has, with a lot of help from Nanci, Marva and the small group of extraordinary women that Nanci gathered in her living room a few weeks after she met Jon Shestack, the founder of Cure Autism Now.

Three months after that meeting, this group put together Facing Autism, an annual fundraiser now in its fourth year. Along the way, they have created an event where, in one evening, you can flirt with a television star, learn about mutations in the Reelin gene, and be moved to tears by their greathearted cause. They've also raised an impressive $2.5 million for Cure Autism Now (CAN).

CAN was founded in 1996 by Shestack, a Hollywood producer whose credits include the blockbuster Air Force One, and his wife, Portia Iversen, an Emmy-winning art director and television writer. In 1994, their firstborn son, Dov, had been diagnosed with autism. A serious neurological disorder that strikes children in the first two years of life, autism has no known cause or cure. It is more common than Down's syndrome or childhood cancer. Yet, in terms of funding and research, it had been left behind.

As Shestack wrote in 1999, "The subject was so cloaked in falsehood and failure that, only three years ago, no one at the National Institutes of Health could tell us how much money was being spent per year on biological research in autism." Clearly, the medical establishment wasn't going to do it, so Shestack and Iversen decided they would.

In the last six years, they have created an astonishingly effective coalition of parents, clinicians and scientists dedicated to finding treatments and a cure for autism. Membership now numbers 45,000 and CAN has funneled more than $11 million into research in the last four years. Today, at least a third of the members of CAN's Board of Directors have come out of northern California, including Nanci Fredkin of Monte Sereno and Atherton resident Marcia Goldman. Facing Autism is CAN's single largest fundraising event. "It's been very important and a tremendous resource in all ways to us," says Shestack.

But that first year, Fredkin really didn't know how successful Facing Autism was going to be. "I remember saying, if we make $25,000, I will be so happy," she says. What she did know is that her good friend Marva Hanks' firstborn daughter was autistic and that her own family life was blessed. She knew there was a stigma to the diagnosis of autism, because her family's background is in mental health, her father having started the first private psychiatric hospital in California. She knew that the pain and isolation of autism struck a nerve and touched her.

And she knew that if she was going to do something, she didn't want to do another black-tie dinner dance with silent and live auctions. "We'd done cars, trips, jewelry," says Fredkin. "So I said to Jon Shestack, bring your friends to northern California -- Rene Russo, Anthony Edwards of ER. We'll sell access to a world money can't buy." The event would be held in a private home, with no more than 200 guests, in order to create an atmosphere of intimacy, the feeling of being at a cocktail party. The auction would feature items that money couldn't buy anywhere but here: a shopping spree and makeover with Rene Russo; dinner with Will Smith; tickets to movie premieres; a day on the set of the TV series West Wing; seats at the Academy Awards.

The first year, the event netted $250,000. "It was magical," says Fredkin. This year, the event, held at the Atherton home of John and Marcia Goldman, netted $750,000. "It's like it's blessed. From the moment we started, it has all fallen into place," says Marcia Goldman. "It feels like a family, so people are much more willing to reach into their pockets. Some of it is the great auction items: amazing things you couldn't ever go out and buy or do. But it's also because people are just so touched."

Nanci Fredkin describes autism as a diagnosis that "touches the soul of humanity: how we relate to our children." For the first 18 months or so of life, children develop normally but then, suddenly, they begin to retreat into themselves, losing speech, no longer making eye contact, developing repetitive behaviors, such as head-banging, flapping their hands and arms, and biting. Jon Shestack described the onset of autism in Dov, as he stopped answering to his name and lost the few words he had known: "In two months, our most precious gift seemed to vanish in front of our eyes. This is the special curse of autism. You have your child, and yet you don't have him."

Autism is, in fact, a diagnosis that exists along a spectrum, described by psychologist Lorna Wing as a continuum that "ranges from the most profoundly physically and mentally retarded person… to the most able, highly intelligent person, with social impairment in its subtlest form as his only disability. It overlaps with learning disabilities and shades into eccentric normality." The Center for Disease Control estimates that autism in some form now affects one out of every 250 to 300 children in this country. A December, 2001, article in Wired magazine dealt with the fact that the diagnosis has reached epidemic proportions in Silicon Valley.

Two years ago, during the Facing Autism event, auctioneer Ross Dove asked anyone in the room who had been affected by an autistic child to stand. A third of the room stood. Afterward, one of the attendees sought out Fredkin to thank her. "I answered as I usually do," says Fredkin, "but he said, 'No, you really don't understand. I spend my life as the father of an autistic child, praying that my daughter won't pee on the floor in public or start screaming uncontrollably. I have never stood proudly in a room because I was the parent of an autistic child.'"

"We're doing so much more than raising money and raising awareness," says Fredkin. "We're changing the way people feel about their own families." The first year of the event, Fredkin received about 50 letters, including one from a well-known Silicon Valley individual who asked that his identity never be revealed, but who wanted her to know that he had an autistic brother. He had never imagined he would be in a room where his peers were educated about autism and wanted to help find a cure for this disease that had been so surrounded by shame for him.

The millions raised by Facing Autism go directly to CAN -- their overhead is less than 9% -- and from CAN they go directly to science, funding biomedical research. "We are the most aggressive, innovative group out there doing autism research," notes Shestack. "When we started there were 12 research projects, now there are 200 and some of the biggest names in science are now interested in working in autism."

The latest research indicates that autism is a genetic disorder with environmental factors. "The most exciting thing in the field is that we do seem to be narrowing in on some of the genes and expect to identify a couple of the major genes very soon," says Shestack. "And the reason that's important is that if you find the gene, you can figure out what pathway isn't working and that suggests a hundred different ways to intervene."

In the meantime, another area of research that is creating a great deal of excitement is neural re-training. Notes Shestack, "Neural re-training builds on the idea that we now know the brain continues to grow and change. That development doesn't stop in childhood and we know with the right kind of therapy there is the potential to bring back damaged areas or re-wire around them. So a lot of our efforts are going into developing totally new strategies for neural re-training with very young children."

CAN has also funded the Archimedes Project at Stanford, which is seeking to develop a communication tool, a type of PDA, which would be inexpensive and easy for autistic children to use. Shestack's son had a huge breakthrough last year, when they discovered he could read and write. "We had been teaching him stuff for a long time, but we had no way of figuring out if he could learn it," says Shestack. "We were requiring all his answers to be oral and he can't talk. He initially wrote by pointing to letters on the board. Now he can do some typing. His spelling is perfect. His diction is perfect. It turned family life upside down. We could talk to him like he was nine, instead of three."

But probably the most important piece of work fostered by CAN is the Autism Genetic Resource Exchange (AGRE), a gene bank. AGRE collects blood samples, extracted DNA, diagnostic interviews, family histories and biomedical materials from "multiplex" families -- families who have two or more children with autism. It is the largest autism gene bank in the world. And it is open to the entire scientific community.

What's next for CAN? "We don't think about autism as just a problem," says Shestack. "We think about autism as an urgent problem. And even six years into our work, we still feel exactly that way." After literally creating a field where there was none -- the field of autism research -- the next hurdle for CAN is to lead it quickly to success. That will involve collaboration between academic and commercial researchers, which requires more funding.

And that's what's next for Nanci Fredkin and her committee. Plans for next year's Facing Autism are well underway. "We haven't cured autism," Shestack notes, "but we've made a giant impact." They really have changed the world.