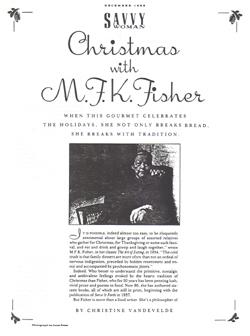 When this gourmet celebrates the holidays, she not only breaks bread, she breaks with tradition.

"It is possible, indeed almost too easy, to be eloquently sentimental about large groups of assorted relatives who gather for Christmas, for Thanksgiving or some such festival, and eat and drink and gossip and laugh together," wrote M.F.K. Fisher, in her classic The Art of Eating, in 1954. "The cold truth is that family dinners are more often than not an ordeal of nervous indigestion, preceded by hidden resentment and ennui and accompanied by psychosomatic jitters."

Indeed. Who better to understand the primitive, nostalgic and ambivalent feelings evoked by the hearty tradition of Christmas than Fisher, who for 50 years has been penning lush, vivid prose and poems to food. Now 80, she has authored sixteen books, all of which are still in print, beginning with the publication of Serve It Forth in 1937.

But Fisher is more than a food writer. She's a philosopher of food, a candid chronicler of life, interested in who and what graces a table, engaged by what precedes and follows as well as what occurs during a meal. As Clifton Fadiman wrote in his introduction to her The Art of Eating, "Food is her paramount but not her obsessive concern. It is the release-catch that sets her mind working. It is the mirror in which she may reflect the show of existence."

Still beautiful, her long silver hair twisted and held back wit tortoise-shell combs, Fisher lives in Sonoma Valley in California wine country, where she is visited b a constant stream of "hungry and thirsty strays." On this day, her guests are offered cold white wine and served tomatoes drizzled with olive oil and speckled with basil, tender salmon, pickled cucumbers, brown bread and biscotti. Following Fishers direction, the food is prepared and served by an assistant, as she regales her guests with stories about Christmas entertaining.

Adjusting her black-and-white silk caftan and picking up her 1-2-3, a drink she invented by combining one part Campari, two parts gin and three parts dry vermouth, Fisher says, "I love Christmas. I really do. I think it is very special. I took a vow long ago that I would never write another nostalgic thing about Christmas. But if I were 189, I would still get a special kick out of it."

The "cottage," as Fisher calls her home, is somewhat eccentric, with only two large rooms, a bath and a porch. The domed redwood roof soars over a kitchen/living room and a bedroom/office. The large, Pompeiian-red bathroom serves as a gallery in which Fisher rotates displays of Picasso oils or paintings by her late husband, Dillwyn Parrish. Books line the walls of every room. Tabletops are littered with mementos and vases of fresh flowers, a cat sleeps in a doorway, and a basket of beribboned preserves sits cockeyed on a chair cushion. Navaho rugs in dusky hues of ochre and moss green are thrown over daybeds. And at the back of the house, a large porch with a fan-back rattan chair faces a field in which cattle graze. It's clear that here lives a woman who understands home and hearth and celebration.

Fisher, who is currently "working on four or five secret projects," speaks as she writes, punctuating the air with her long, elegant hands and waving her arms to signify exclamation. Ask her a question and she answers with a five-minute story. Like her writing, her views on the subject of Christmas are clear-eyed and unsentimental. "I can't talk about creating those feelings everybody wishes they had at Christmas. If the feeling isn't there, you know, it isn't there," she says.

"I remember one Christmas when we didn't have any children, except one little misbegotten grandson. And Christmas should definitely be a time for children, the child in people," says Fisher. "And we felt terribly old and bored, and that was the only Christmas we ever drank too much. All the sadness crept up on us, and there was this one little boy and we were all being terribly, terribly gay for him. Nobody even got drunk. We just drank steadily, quietly, too much. And every now and then, we would try to revive and be happier. So we would have another little drink, just a wee one. And this little boy didn't give one small damn, because he didn't know. Maybe he had a wonderful time, maybe he forgot al about it, I don't know. . . . We kind of used him as an excuse to even have Christmas.

Fisher has written thousands of words on the subject of Christmas. In Among Friends, her memoir of growing up in the Quaker community of Whittier, California, she recounts her childhood holiday parties in the parish house and Elks Club as the first great debauches in her life, where the hot cocoa, with cookies brought by the Guild's prize cooks, tasted exactly like Christmas itself."

When Fisher compiled the excerpts for Here Let Us Feast, a collection of writings "concerned with man's fundamental need to celebrate the high points of his life by eating and drinking," it pained her to select only pieces of Charles Dickens's A Christmas Carol, because "the whole foolish moving story is one of food, physical and spiritual, and I would have liked to put it here as I best like to read it, uncut. . . .'" And in As They Were, she recounts a Christmas spent alone at Arles, visiting the Roman sarcophagi and the Christmas Market on Les Lices, walking by herself under the Christmas lights that gave the streets a white glare without shadows. "I've spent many Christmases alone. That one, nobody gave a damn about me," she remembers. "So I just chucked around. I wasn't unhappy"

After all, as she wrote in An Alphabet For Gourmets, "It must not simply be taken for granted that a given set of ill-assorted people, for no other reason than because it is Christmas, will be joyful to be reunited and to break bread together. They must be jolted, even shocked, into excitement and surprise and subsequent delight. All the old, routine patterns of food and flowers and cups must be redistributed, to break up that mortal ignominy of the family dinner, when what has too often been said and felt and thought is once more said, felt and thought."

When Fisher used to celebrate Christmas by serving large meals to large crowds, she would change the order of the meal, the location and the dishes from year to year. Family dinners—"intramural sport," she calls them—must be prearranged with care and caution. Even then they may not quite turn out. But in the shake-up, memories can be made.

"I don't like turkey. They didn't like turkey. But we always had turkey. Then when we had our own homes, we broke away from that. One time in St. Helena [after World War II], there were about twenty of us for Christmas and we decided we would have pot roast with prunes. It's very German—it cooks all day, you know, rich and dark and gravyish, and you have lots of noodles with it," says Fisher, who describes herself as "foolhardy enough" to have actually staged family dinners more than once.

"So I got the pot roast and I worked on it for about a week," she continues. "It was an enormous things, the biggest pot roast in the world. Well, about halfway through dinner we just gave up. I laughed. It was like mummy stuff. I could have taken an axe to it and hit it, but you couldn't cut it. Well, it had been preserved under infrared light. It was just after the war and you couldn't tell if the meat you got was infrared or not. When it's raw it cuts beautifully, you know. So it stayed exactly that way, the biggest, most beautiful pot roast in the world And at the end of diner, Little John, who was then about 10, said, 'Dodie,'—that's me—'this is the best gravy I ever ate,' And I thought, 'you darling kid.'"

Christmas is not longer a family affair for Fisher. Some time ago, she decided her two daughters, who now have their own families, should have their own celebrations. "For along time, we all met at the ranch where my mother and father were. After they died, then, as the oldest, they had to come to me. They would and they did," she says. "Then I realized it was a terrible, terrible job for all of us. They wanted their own Christmases with their own families. So I remember thinking—for two or three months, I believe—and I finally wrote a family letter, which we never did, a parental ultimatum. 'Go to hell,' in a way it said. 'You have your Christmases where you want them and when you want them. I am gong to, too.' We all love each other dearly—did, do and will. But a sigh of relief went up that you could have heard on Mars 'Thank God we don't have to do that anymore.' It was terrible to keep up the old bluffs. We all decided we weren't gong to pretend any longer. And it is now very nice."

This Christmas, Fisher would like to be in France. But wherever she celebrates, there is sure to be good, simple food and wine. "And there will be people," she says. "We always have people. I have always believed you should have at least one unknown person at any feast." And they will not just eat, they will dine.