Parenting, Praise and the Process 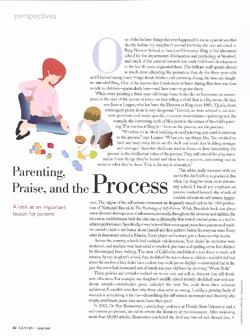 A look at an important lesson for parents

One of the luckiest things that ever happened to me as a parent was that shortly before my daughter's second birthday we got a call that she had been admitted to Bing Nursery School at Stanford University. We were still relative newcomers to the Peninsula and had applied to several preschool programs. Bing was simply the first one to admit us and so one sunny January morning, we enrolled our daughter in what we came to realize is one of the finest preschool programs in the country.

I learned many, many things about children and parenting during the time my daughter attended Bing, which is the laboratory school for the departments of education and psychology at Stanford and where much of the seminal research into early childhood development in the last 45 years has originated. The brilliant staff there spends almost as much time educating the parents as they do the three-year-olds. And one of the most important lessons I learned was how to talk to a child, particularly how -- and how not to -- praise them.

It's really not so surprising that every painting a three-year-old brings home looks like an Impressionist masterpiece in the eyes of the parent, but telling a child that is a big no-no. "Quick, short, extravagant praise alone is very dangerous," says Jeanne Lepper, who has been the Director at Bing since 1989. Instead, what you want to do is make specific, concrete observations. Comment on the interesting circle of blue paint in the corner of the easel painting. Ask relevant questions like where the road in the picture leads. The mantra at Bing is -- focus on the process, not the product.

"Whether it's in block building or easel painting, pay careful attention to the process," says Lepper. "When you say things like 'You worked so hard and used every block on the shelf and made that building stronger and stronger,' then the child can start to focus on how interesting the process is, the intellectual value of the process. They internalize these things they've heard and then have a positive, interesting way to measure what they've done. That is the key to education."

This advice really resonated with me. I took it very much to heart and to this day still try to practice it. But when my daughter went on to elementary school, I found any emphasis on process crushed beneath the wheels of the self-esteem juggernaut.

Beginning with the 1969 publication of Nathaniel Branden's The Psychology of Self-Esteem, this movement inextricably linked praise, self-esteem and performance. If you extravagantly praise a child, the thinking went, he will feel better about himself and perform better. So, everyone in elementary school is Matisse. Everyone is a winner. Every kid on every team gets a championship trophy.

Across the country, schools had multiple valedictorians, "first chairs" in orchestras were abolished, and teachers were instructed to overlook grammar and spelling errors lest children be discouraged from writing. California established a task force to study self esteem. And at my daughter's school, they abolished the talent show so children wouldn't feel badly about themselves if they didn't have a talent they could display -- understand this event showcased acts such as rowdy ten-year-old boys lip-synching "Wooly Bully".

These policies and attitudes rankled me to my core and still do. Because they still dominate education -- my daughter's middle school recently abolished year-end academic awards. Yet, aside from their inherent unfairness, I couldn't articulate why these ideas were so wrong. Luckily, a growing body of research is discrediting the self-esteem movement and showing that empty, extravagant praise does more harm than good.

In 2003, Dr. Roy Baumeister, a psychology professor at Florida State University and a self-esteem proponent, set out to review the literature of the movement. After revaluating more than 18,000 articles, Baumeister concluded the field was littered with flawed data and junk science. Only 200 of the articles met the rigorous standards of the Association for Psychological Science. It was, says Baumeister, "one of the biggest disappointments of my career."

Meanwhile, in our own backyard, Stanford psychologist Carol Dweck has shown exactly why we need to return to focusing on the process when we talk to our children. In her new book, Mindset: The New Psychology of Success, based on three decades of research, Dweck explains how and why people achieve their potential in life -- and the key isn't ability. A large part of her research focused on over-praised children and found that general praise -- telling your child they are smart -- can backfire. It does not, in fact, lead to better performance as the self-esteem proponents would have you believe.

Easily frustrated, the overpraised child, in fact, has a tendency to give up too quickly. Given a series of tests, those praised for their smarts performed progressively worse, those praised for their effort improved. It turns out praise can sap motivation, leading to performance anxiety. What's worse, overpraised children were more competitive and often overstated their scores to peers.

Dweck's research is the natural extension of the Bing Nursery School advice about focusing on process, instead of product. In Mindset, she offers much the same advice as the staff at Bing -- give constructive criticism, emphasize effort and make praise sincere and focused. Children, like adults, says Bing Director Lepper know when praise is hollow.  "When parents comment in meaningful ways, it tells children their work is genuinely valued."

You might want to remember this when your child presents you with yet another rendering of a rainbow and flowers. It's certainly easy to say, "You're such a wonderful artist. Why don't you make me another picture?" That way you can continue cooking the pasta for dinner or making the appointment with the plumber who's on hold or watching your favorite soap opera. But how much more energy does it take to say, "Are there other things in the garden?" The payoff for being more present with your child is huge -- there's proof for that now. And you also might want to pick up a copy of Carol Dweck's book for your elementary school library.