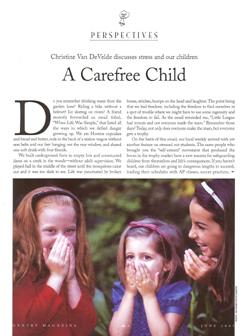 Do you remember drinking water from the garden hose? Riding a bike without a helmet? Ice skating on rivers? A friend recently forwarded an email titled, "When Life Was Simple," that listed all the ways in which we defied danger growing up. We ate Hostess cupcakes and bread and butter, rode in the back of a station wagon without seat belts and our feet hanging out the rear window, and shared one soft drink with four friends.

We built underground forts in empty lots and constructed dams on a creek in the woods -- without adult supervision. We played ball in the middle of the street until the mosquitoes came out and it was too dark to see. Life was punctuated by broken bones, stitches, bumps on the head and laughter. The point being that we had freedom, including the freedom to find ourselves in a spot of trouble where we might have to use some ingenuity and the freedom to fail. As the email reminded me, "Little League had tryouts and not everyone made the team." Remember those days? Today, not only does everyone make the team, but everyone gets a trophy.

On the heels of this email, our local weekly arrived with yet another feature on stressed-out students. The same people who brought you the "self-esteem" movement that produced the boom in the trophy market have a new mantra for safeguarding children from themselves and life's consequences. If you haven't heard, our children are going to dangerous lengths to succeed, loading their schedules with AP classes, soccer practices, community service fundraising and drama club meetings, all the while staying up half the night with homework in pursuit of a "trophy" college admission.

First of all, let me say that as with all such movements, there is an underlying truth in their complaints. There is no doubt in my mind that there are students who would be well-served by spending more time playing with matches and less time studying -- remember when you could buy cherry bombs through the mail? The kind of free time we all grew up with is what produces resilience and imagination -- witness the innovation our generation has produced. I have yet to meet a Silicon Valley engineer who wasn't buying chemicals through the mail during his high school years in order to build rockets in the back yard.

But my problems with the "stamp out stress" brigade are twofold. First, there's the hypocrisy. They decry the frenzy of AP exams and extracurricular activities, but offer as a solution knitting clubs, yoga classes and a book group to discuss a book about stressed out students! The real solution is simple. If you want to cut back on the stress, get rid of some of the homework. But they won't do it, because parents and educators talk out of both sides of their mouth on this subject -- they bemoan student burnout but would scream if their admissions to the Ivy League went down.

Second, the uproar over stressed-out students is another example of over-protective parenting, the "you'll shoot your eye out with a BB gun" school run amok. What if your child wants the trophy admission to Stanford? What if that is their fondest wish? Face it, they'll need a 4.5 GPA and 6 APs under their belt to compete. But why protect him or her from that? What is valuable in life that is easy to achieve? And, hey, maybe they won't make the Farm team. They'll survive. We did.

And if Stanford isn't their fondest wish, you might want to resist the pressure to hire a batting coach or have them tutored in Mandarin Chinese. Remember when doing nothing meant riding your bike for miles, catching tadpoles in a creek, starting a pick-up game of basketball, reading a stack of comic books, baking a cake or building a rocket in the backyard? After a summer like that, you probably wouldn't have to worry so much about stress.