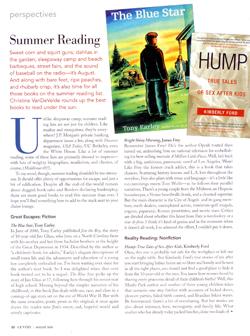 Sweet corn and squirt guns, dahlias in the garden, sleepaway camp and beach barbecues, street fairs, and the sound of baseball on the radio -- it's August. And along with bare feet, ripe peaches, and rhubarb crisp, it's also time for all those books on the summer reading list. Christine VanDeVelde rounds up the best books to read under the sun.

Unlike sleepaway camp, summer reading lists are not just for children. Like madras and mosquitoes, they're everywhere! J.P. Morgan's private banking department issues a list, along with Discover magazine, USA Today, UC Berkeley, even the White House. Like a lot of summer reading, some of these lists are primarily dressed to impress -- with lots of weighty biographies, nonfiction, and classics, of course, (Middlemarch!?!).

To my mind, though, summer reading shouldn't be too strenuous. It should offer plenty of opportunities for escape, and just a bit of edification. Despite all the end-of-the-world rumors about sluggish book sales and Borders declaring bankruptcy, there are more good books to read this summer than ever. I hope you'll find something here to add to the stack next to your chaise.

In June of 2000, Tony Earley published Jim the Boy, the story of ten-year-old Jim Glass, who lives on a North Carolina farm with his mother and her three bachelor brothers at the height of the Great Depression in 1934. Described by the author as "a children's book for adults", Earley's elegant descriptions of small town life and the adventures and education of a young boy completely enthralled me. I've been waiting ever since for the author's next book. So I was delighted when that next book turned out to be a sequel. The Blue Star picks up the story of Jim Glass at seventeen, following him through his senior year of high school. Moving beyond the simpler narrative of his childhood, in this book Jim deals with sex, race, and class in a coming-of-age story set on the eve of World War II. But with the same evocative, poetic prose as the original, it once again draws the reader into Jim's sweet, sad, hopeful world and utterly captivates.

Remember James Frey? He's the author Oprah touted then turned on, ambushing him on national television for embellishing his best-selling memoir A Million Little Pieces. Well, he's back with a big, ambitious, panoramic novel of Los Angeles. Wow! Like Frey the former crack addict, this is a book that takes chances. Scattering history lessons and LA lore throughout the storyline, Frey also plays with tense and language -- it's a little like e.e.cummings meets Tom Wolfe -- as he follows four parallel narratives. There's a young couple on the lam from the Midwest, an Hispanic housekeeper, a Venice boardwalk drunk, and a closeted superstar. But the main character is the City of Angels and its gang members, meth dealers, unemployed actors, miniature-golf moguls!, yoginis, paparazzi, Korean prostitutes, and movie stars. Critics are divided about whether this latest from Frey is tomfoolery or a tour de force. I think it's kind of genius and in the moments when it doesn't all work, I so admired the effort, I couldn't put it down.

Okay, this one is probably not safe for the workplace or left out on the night table. But Kimberly Ford's true stories of sex after you start bringing babies home are so blunt and bawdy and honest in all the right places, you should just find a good drawer to stash it in -- away from the 10-year-old or the teen. You know how women bond by sharing every gruesome detail of their children's births? Well, this Menlo Park author and mother of three young children takes that scenario one step further with accounts of locked doors, pleasure parties, failed birth control, and Brazilian bikini waxes. Be forewarned: there's a bit of oversharing. But her stories are also about intimacy, love, monogamy and family life. What mother who has already today packed lunches, done two loads of laundry, and played Pretty Ponies doesn't recognize herself when Ford writes that sex "was a desperate clinging to some semblance of a self not entirely eclipsed by maternity"?  And these true tales from Ford and her friends (we hope she's changed some names here) will also provide plenty of opportunities to laugh out loud in recognition -- as in one husband's Top Reasons We Don't End Up Having Sex -- "No. 4: Grey's Anatomy." If you felt a kinship with Anne LaMott after reading Operating Instructions, you'll feel like you've found another soul-baring friend in Hump.

The Empty Nest: 31 Parents tell the Truth about Relationships, Love and Freedom After the Kids Fly the Coop, edited by Karen Stabiner

"First you die a terrible death and then you are reborn." That's how my friend Christina describes what happens to parents when their children leave for college. This collection of essays confirms that prognosis. Contributors like Ellen Goodman, Charles McGrath and Jon Carroll write about the pleasure and the pain of this parental rite of passage in ways that will make weep and then finally take heart. You'll feel like the air has been knocked out of you when Anna Quindlen laments, "Mom is my real name. It is, it is." And like sociologist Harvey Molotch, I miss grocery shopping for mac and cheese, fruit roll-ups and frozen pizza -- there is no one here who eats that stuff anymore.  Apparently, though, being on the other end of the spectrum from Hump also has its advantages. Former Ms. Editor Letty Cottin Pogrebin in "Epiphanies of the Empty Nest" reports that "You lose a kid, you gain a sex life." The Empty Nest is a survival guide, but also a support group -- 31 fellow travelers you can commiserate with when your child heads off to the halls of higher academe.

Love the One You're With, Emily Giffin

The thing I love about Emily Giffin's books is that she takes situations you may have fantasized about or lived through and spins them out into a story that is so inviting that you want her and her characters to move in next door and be your new best friends. Yes, even the lawyer who sleeps with her closest friend's fiancée in Something Borrowed. In Giffin's latest, photographer Ellen Graham believes she's happily married to her best friend's brother, a moneyed Wasp mensch. That is, until a chance meeting with "the one that got away." Who hasn't fantasized about what might have happened if…? Giffin does an excellent job of letting us live that one out vicariously while telling us a story that is so modern, multi-layered and moving that you'll feel a little sad when it comes to a close, the way you feel when you part ways with your real-life girlfriends after a night of cocktails and great conversation.

It's not summer without a great mystery to tuck into your beach bag, so here it is. Ethics chair for the $3 billion Human Genome Project and one of this country's most renowned experts on law and genetics, Andrews ups the ante for the police procedural again in her second mystery featuring Dr. Alexandra Blake, the forensic genetic specialist who works for the Armed Forces Institute of Pathology. This time, Blake must deal with a body with a bayonet wound, war crimes and Washington politics as usual, as she follows the path of a cache of Vietnamese "trophy skulls" brought back from war by American servicemen. When Andrews brings her considerable expertise to bear in this mystery series, life often imitates art and publication of her latest book coincided with efforts to return the actual trophy skulls, as well as the first visit of a Vietnamese president to the White House since the Vietnam War.  Let's hope that trend doesn't continue. In her next book, Immunity, due in September, there's another killer on the loose -- a fatal infectious disease. Is it a flu bug or a bioweapon?

And finally, summer reading lists are traditionally heavy with hardbacks, so here's something to lighten your beach bag -- the Kindle, Amazon's portable reading device. Using a new display technology called electronic paper, the Kindle's black-and-white screen is crisp, clear and easy to read. About the size of a thin paperback, the Kindle weighs 10 ounces and allows you to wirelessly search for and download books, magazines, and newspapers, holding up to 200 titles. It's a breeze to navigate and lets you bookmark, annotate and highlight text, as well as export notes and key passages. It also lets you download the beginning of any book free to see if you like it. What's more, books for the Kindle are cheaper than their paper counterparts -- new releases and bestsellers are just $9.99. And don't worry, there are no system requirements because no computer is necessary. If you regularly cart a dozen books to Hawaii, as I do, it will make the person who hoists your baggage happy, too. Maybe that's why my husband bought me one?