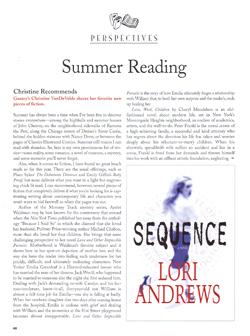 Summer has always been a time when I've been free to discover stories everywhere -- among the highballs and summer houses of John Cheever, on the neighborhood sidewalks of Ramona the Pest, along the Chicago streets of Dreiser's Sister Carrie, behind the hidden staircase with Nancy Drew or between the pages of Classics Illustrated Comics. Summer still means I can read with abandon. So, here is my own promiscuous list of stories -- some reality, some romance, a novel of manners, a mystery, and, some memoir you'll never forget.

Alas, when it comes to fiction, I have found no great beach reads so far this year. There are the usual offerings, such as Plum Sykes' The Debutante Divorcee and Emily Giffin's Baby Proof, but none delivers what you want in a light but engrossing chick lit read. I can recommend, however, several pieces of fiction that completely deliver if what you're looking for is captivating writing about contemporary life and characters you won't want to bid farewell when the pages run out.

Author of the Mommy Track mystery series, Ayelet Waldman may be best known for the controversy that ensued when the New York Times published her essay from the anthology Because I Said So in which she claimed that she loved her husband, Pulitzer Prize-winning author Michael Chabon, more than she loved her four children. She brings that same challenging perspective to her novel Love and Other Impossible Pursuits. Motherhood is Waldman's favorite subject and it shows here in her spot-on depiction of mother love and the way she lures the reader into feeling such tenderness for her prickly, difficult and ultimately endearing characters. New Yorker Emilia Greenleaf is a Harvard-educated lawyer who has married the man of her dreams, Jack Woolf, who happened to be married to someone else the night she first seduced him. Dealing with Jack's demanding ex-wife Carolyn and his lactose-intolerant, know-it-all five-year-old son William is almost a full-time job for Emilia-- one she is failing at badly. When her newborn daughter dies two days after coming home from the hospital, Emilia is undone with grief and dealing with William and the mommies at the Eighty-first Street playground becomes almost insupportable. Love and Other Impossible Pursuits is the story of how Emilia ultimately forges a relationship with William that, to her own surprise and the reader's, ends up healing her.

Love, Work, Children by Cheryl Mendelson is an old-fashioned novel about modern life, set in New York's Morningside Heights neighborhood, an enclave of academics, artists and the well-to-do. Peter Frankl is the moral center of a high-achieving family, a successful and kind attorney who has regrets about the direction his life has taken and worries deeply about his reluctant-to-marry children. When his shrewish, spendthrift wife suffers an accident and lies in a coma, Frankl is freed from her demands and throws himself into his work with an offbeat artistic foundation, neglecting his lucrative law partnership and creating an opportunity for a nasty nemesis. In the meantime, his Ivy League-educated children are also freed to find happiness -- meaningful work, the girl next door or even a charismatic Russian chess master who repairs computers. Mendelson's novels are often compared to those of Jane Austen and rightly so -- Love, Work, Children is a novel of manners, morals, character and a strong sense of place, a quiet, intelligent story of good intentions and the longing for happiness. Best of all, as in Austen's novels, everyone here, in the end, gets what they desire or deserve.

I am a particular fan of mystery novels and this summer there is the usual crop of great mysteries from some of my favorite authors -- Robert Crais, Anne Perry, Robert Parker, and Faye Kellerman all have new books coming out, which I emphatically recommend. Also, don't miss Sequence by Lori Andrews.  In the interest of full disclosure, I have to reveal I've been a friend of the author for many years, but I can honestly urge you to read her first novel -- a whodunit that is equal parts thriller and police procedural. At the Armed Forces Institute of Pathology, geneticist Alexandra Blake has her dream job attempting to sequence the Spanish flu genome so that it can't be used as a bioweapon. But when a serial killer begins targeting women near military bases, Blake is pulled into the investigation. Amid political machinations, a new lover who may be a suspect, and a female FBI director whose ex-husband turns up dead, the young scientist's knowledge of genetics and infectious disease holds the key to unraveling the whole mess. Blake's debut in what is clearly set to become a series is promising -- she's a little edgy and very smart. But what sets Sequence apart from other thrillers is that Andrews brings every bit of her own background to bear on the subject matter and her expertise is considerable. A law professor who served as the ethics chair to the Human Genome Project, Andrews has advised the White House on stem cells and Dubai on cloning and is a prominent player in what some have called the "Wild West of medicine" -- the territory of gene patents, DNA banking, nanotechnology, new species and biowarfare. Luckily, there's plenty of material in the basic substance of life for further Alexandra Blake books.

While escape is often the order of the day for me when I pick up a book, I find myself more and more interested in the reality of non-fiction -- essay, opinion, reportage and memoir. Here are four books that I can't stop thinking about.

Over the Christmas holidays of 2003, the daughter of writer Joan Didion and her husband and fellow writer John Gregory Dunne, suffering an apparent flu, fell into a coma. Days later, Dunne himself, having just returned with Didion from their daughter's bedside, sat down to dinner and suffered a fatal heart attack. The Year of Magical Thinking by Joan Didion chronicles the twelve months that followed.  Drawing on medical literature, Emily Post, C.S. Lewis, Thomas Mann, and her life with her husband, this memoir is Didion's "attempt to make sense of the period that followed… that cut loose any idea I had ever had about death, about illness, about probability and luck, about good fortune and bad, about marriage and children and memory, about grief… about the shallowness of sanity." Once in a great while, I read a book that is so stunning in its truth and prose that I can't bear to finish and lose the experience of reading it -- that's the highest praise I can offer. Months later, I am saving the last few pages of The Year of Magical Thinking for a time when I need them.

Marjorie Williams, who died last year at the age of 48 from liver cancer, was best known as a writer of political profiles for Vanity Fair and the Washington Post, but she was also a columnist and essayist for the Post and Slate, where she wrote about motherhood, family life, and her battle with cancer. Her work is collected in The Woman at the Washington Zoo: Writings on Politics, Family and Fate. The pieces here are sometimes uneven in quality and some are dated, but Williams' profiles capture the character of her subjects in eye-opening ways. "Even Barbara Bush's stepmother is afraid of her," begins a piece on the former First Lady. Williams' essays are full of wit and real insight into parenting, as well as her own illness. She totally gets being a mother today -- you will nod in commiseration, laugh out loud and have your heart broken as you read. In one of the last pieces she wrote, Williams recounts going wild with the lip gloss and glitter as she costumed her nine-year-old daughter for Halloween. She was, she realized, "cheating time", pretending the calendar had flipped forward five or six years when her daughter would go out on her first date or attend the prom. The role she had played that evening, she writes, "was the fifty-two year old mother I will probably never be." She died a few months later.

Williams, who wrote often of the dilemmas of work and family, might have been a member of the "I-hate-Caitlin-Flanagan Club". Flanagan is controversial, powerfully politically incorrect, and a terrific writer, who, perhaps most famously, penned an Atlantic essay in 2004 that opined "when a mother works, something is lost."  In her first book, To Hell with All That: Loving and Loathing Our Inner Housewife, Flanagan's smugness sometimes gets in the way of some of the best thinking I've read on child-rearing, housework, marriage, and sex. But you shouldn't let her smugness or her penchant for provocation deter you from picking up this book, because Flanagan is one of the few women writers willing to look in nuanced ways at issues that the media and women in general seem to want to gloss over.  In a piece about sexless marriages, Flanagan notes "For many couples, child rearing has become not merely one aspect of marriage but its entire purpose and function." And in a piece on housewives vs. at-home mothers (a cunning distinction) she writes of the housewife writers Erma Bombeck, Peg Bracken, and Jean Kerr who "regarded their work in much the same way middle-class husbands of the era regarded theirs: tedious, rarely glamorous, and necessary to the support and nurture of their families -- institutions they regarded… as their lives' great achievements."

As author Rosalind Wiseman traveled the country after the publication of Queen Bees & Wannabees, the 2002 bestseller that mapped the social hierarchy of teen girls, she found that after every appearance audience members approached to tell her that if she thought the girls were bad, she should see their mothers. Every parent should read the book that resulted from that feedback -- Queen Bee Moms & Kingpin Dads: Coping with the Parents, Teachers, Coaches and Counselors who Can Rule -- or Ruin -- Your Child's Life. The denizens of Wiseman's "Perfect Parent World" will be familiar to anyone who has ever sat on the sidelines of a soccer game or attended a Back-to-School night, but Wiseman goes one better than simply defining the archetypes by providing plenty of practical advice and strategies for dealing with difficult situations. Your daughter isn't invited to a friend's "party of the year" -- do you call the other mother? Your son is warming the bench all season -- do you talk to the coach? When a volunteer committee member at your child's school excludes another parent -- do you confront them or quietly resign? Wiseman doesn't pull any punches here and as a result this is a truly helpful book for all parents trying to navigate "the happy medium between overprotective parenting and frightened passivity."

If that doesn't keep you busy, keep your eyes out for these new releases, as well: Wendy Wasserstein's first novel, Elements of Style, a terrific send-up of Manhattan mommies and mores; Anne Taylor Fleming's splendidly written As If Love Were Enough; Nora Ephron's laugh-out-loud essays in I Feel Bad About My Neck: And Other Thoughts on Being a Woman; and the next Silicon Valley bestseller, Carly Fiorina's memoir Tough Choices. Enjoy…