Life in the Bay Area can be murder 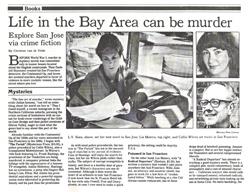 Before World War I, murder in mystery novels was committed only in manor houses located about the English countryside. Then Dashiell Hammett created his San Francisco detective, the Continental Op, and lavender-scented murders departed in favor of violence in more realistic venues, like the street where you live.

"The fine art of murder," wrote mystery critic Julian Symons, "can tell us something about the world we live in." Thus I found myself, a recent immigrant to the Northern California suburbs, perusing the crime sections of bookstores with an eye out for book-cover renderings of the Golden Gate Bridge and dust-jacket mentions of Silicon Valley, eager to read what the genre had to say about this part of the world.

Already familiar with the Continental Op of the 1930s and far more interested in San Francisco in the 1980s, I began with "The Pariah" (Mysterious Press, $15.95), a police procedural by Collin Wilcox, also a transplanted Midwesterner. In Wilcox's fourteenth book featuring Lt. Frank Hastings, the prostitutes of the Tenderloin are being murdered. A computer printout links the killings with the appearances of a famous TV evangelist, Austin Holloway. Hastings has an eyewitness, a pimp who fingers Holloway's son, Elton. But Austin has presidential aspirations and a powerful organization more interested in protecting his family and his past than the prostitutes.

As with most police procedurals, the tension in "The Pariah" lies not in the unraveling of clues but in the pursuit of evidence. Fans of Hastings will enjoy the search for clues, but for me Wilcox plods rather than stalks. The subject of corrupt evangelists is timely, and there is a healthy dose of paranoia, but Wilcox's characters are one-dimensional. Although it does warm the heart of an urbanite to tour San Francisco (I now know that the St. Francis Hotel lobby has exits onto Powell, Post and Geary streets, in case I ever need to make a quick getaway), the setting could be Anycity, U.S.A.

On the other hand, Lia Matera, with "A Radical Departure" (Bantam, $3.50), has written a mystery that couldn't take place anywhere but San Francisco. Willa Jansson, an attorney and amateur sleuth, has gone to work for a law firm of "credentialed lefties." While lunching at a chic California-cuisine restaurant, one of them drops dead of hemlock poisoning. Jansson is a suspect. But so are her hippie mother, the Teamsters and several compromised liberals

"A Radical Departure" has almost everything a good mystery needs. There is a complex plot, social commentary, loads of atmosphere and a cast of unusual characters—California lawyers who would rather be vineyard owners, reformed radicals, and networking private eyes soaking up the sun in Santa Cruz. No mere backdrop, the Bay Area is as much a part of this tale as the corpse.

Matera's lawyer/sleuth has a contemporary, original voice—straightforward and sassy. "We were on one of San Francisco's windiest corners, on a street that roared with traffic, outside a wood-floored funeral parlor that had recently been a Ukrainian lodge and still smelled faintly of piroshkis. The place lacked elegance, but it was a good union shop and Julian Warneke wouldn't have wanted anyone picketing his funeral." The reader wants to hang out with Jansson and see more of her clear-eyed view of the world.

The Sacramento-San Joaquin River Delta is the scene of "Eye of the Storm" (Mysterious Press, $15.95) by Marcia Muller, who does a masterful job of winding its sloughs and narrow levee roads around her characters and clues. Private investigator Sharon McCone visits remote Appleby Island at the request of her sister, who along with five others is turning an agricultural baron's Victorian mansion into a bed-and-breakfast inn. The project is threatened by random vandalism, cash shortfalls and the legend of a long-dead hermit. Very quickly, Sharon finds evidence of fraud and, soon after, a dead body. The violence mounts with an approaching storm that strands the renovators, one of whom is a murderer.

Wonderfully plotted, "Eye of the Storm" boasts disguise, deception, a ghostly legend and plenty of murder. None of the characters are particularly likable, but that only enhances the mood of menace. Muller has taken the elements of the English manor mystery and created a contemporary tableau of murder.

Finally, what better place to find 20th-century outlaws that San Jose and its environs, where innovation, it seems, extends to murder. In "To Sleep, Perchance to Kill" (Charter Books, $3.95) the third police procedural to feature detective Sgt. Dixie T. Struthers of the San Jose Police Department, L. V. Sims delivers a dead-on look at the volatile world of venture capital and computers in Silicon Valley.

High-tech tycoon Victor Peters is found dead in his computer lab after being gassed with halon. Igor, the company computer, is the most reliable witness, but Struthers can't interview him. The organization's work on top-secret government contracts and fears of industrial espionage hamstring the investigation. Peters' wife describes herself as "finally free," and his partner stands to profit from the death. Then an executive secretary is murdered at her desk, and a pattern of revenge begins to emerge from a paper trail generated by computers.

Sims' story is hard-wired. An authentic, enjoyable rendering of criminology and technology in Silicon Valley, it grabs your attention from page 1 and shows a thorough knowledge of police work. (Sims' husband has been with the San Jose Police Department for 19 years.) The use of secondary story lines (including a well-handled romance) paces the story so it doesn't get bogged down in day-to-day detail. And the smart, capable Struthers is another worthy contender in the continuing feminization of the detective.

At the end of the mystery tour, I was curiously reassured that murder could flourish in the Bay Area with its temperate clime, computer chips and California cuisine. Escape, after all, is the motive for most readers of mysteries, and if you're going to escape, you might as well have a deck, bougainvillea, sunlight and an ocean view.