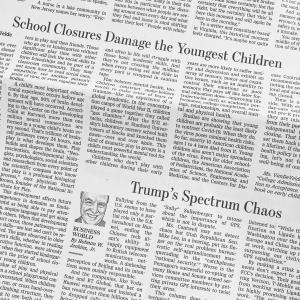 My most recent op-ed in the Wall Street Journal:

In the contentious debate over opening schools, there is almost no mention of the youngest learners—children 2 to 5, who attend day care, nursery schools or prekindergarten programs. That’s a terrible omission. What those children need to accomplish can’t be done in isolation or in front of a laptop, and it has to be done during a brief developmental window that closes around age 5 and never opens again.

The learning needs of the youngest students in pre-K programs are easy to underestimate, because their schoolwork consists of playing together—pretending to be a princess or a superhero, playing house, digging in the sand to create a dinosaur park. Just as older students must work to succeed, pre-K pupils must play, and they must play with each other. As the developmental psychologist Jean Piaget put it, “Play is the work of childhood.”

When children play together, they practice life and become at home in the physical and social world. When they organize a game of “cheetahs in the jungle” or haggle over how to share a wheelbarrow, they are learning to take turns, follow rules, communicate and persuade peers in the face of conflict. These skills can’t be taught. They are learned through concrete interaction with peers, not siblings and not parents. Children have to explore for themselves what it’s like to be part of a group. In settings like day care and pre-K programs, children are put together with strangers, who become collaborators in play and then friends. Those who go on to kindergarten without significant play time with other children will lack the social skills to form friendships and be part of a classroom community. They may not know how to read social cues, empathize, see another person’s point of view, or even regulate their bodies.

A child’s most important educational experience occurs before age 6. By that age, 90% of brain development will have occurred. According to the Center on the Developing Child at Harvard, more than one million neural connections are formed in a young child’s brain every second. That’s trillions of brain-cell pathways every 24 hours, and play is what develops them. Play builds and shapes the brain. “Neuroscientists, developmental biologists, psychologists, social scientists and researchers from every point of the scientific compass now know that play is a profound biological process,” says physician Stuart Brown, founder of the National Institute for Play.

This development affects future competence in domains as fundamental as being able to pay attention, acquire language and get along with others. When that development doesn’t occur, those pathways—and those skills—are lost and can’t be recovered. The gaps observed in older children’s skills, whether in reading or executive function, were already present when they started kindergarten. That’s the price of school closures for young children.

The value of play and physical activity on a school playground can hardly be overstated. When children play catch, run, or cross hand-over-hand on a climbing structure, they are learning to use both sides of their body and both hemispheres of their brain together. This is called cross-lateral development or “crossing the midline.” We do it when we scratch our nose or cross our ankles—and read and write. Children who don’t cross the midline early and often in life will struggle with those basic academic skills. And they’re not crossing the midline when every swing set and slide in every park is wrapped in caution tape.

Play bolsters mental health, too. Children construct make-believe worlds to make sense of fears or traumas—like the experience of a global pandemic. In the concentration camps of World War II, children played a game together they called “gas chamber.” After the 9/11 attacks, children at Stanford University’s laboratory nursery school built towers of blocks and knocked them down—over and over again. This kind of dramatic play in groups is a child’s most powerful mental tool for understanding the world.

Children who don’t play with other children during their early years are more likely to suffer anxiety and depression and exhibit an array of sensory, motor and cognitive issues, such as an inability to control their emotions or poor memory. Play pays off like later formal education does—improving life trajectories such as academic performance, college completion, earnings, relationships, and overall mental and physical health.

Studies are showing that young children are probably the least likely to contract Covid-19. When they do, the virus poses minimal health risks. So far, exactly 10 American children ages 1 to 4 have died from it. Young children also aren’t major spreaders of the virus. Even for older schoolchildren, the American Association of Pediatricians, the National Academies of Science, Engineering and Medicine, and the Centers for Disease Control and Prevention have recommended that schools reopen, noting the social, emotional, behavioral and academic harm of remaining closed.

Time is not on our children’s side. With every passing day that day-care centers, nursery schools and pre-K programs remain closed, they are missing out on learning from their peers and the critical developmental window for play is closing. That has the potential to set them back in ways that will last a lifetime. If the purpose of public-health policy is to promote well-being, let’s not forget the lifetime well-being of our youngest.

Ms. VanDeVelde is the author of “College Admission: From Application to Acceptance.” She is writing a book on early childhood education.