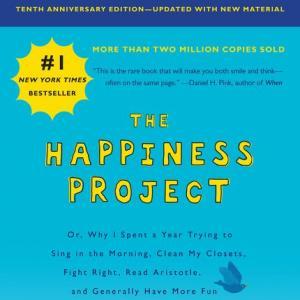 I’m ten years late to this party. But that made me just in time for the 10th Anniversary edition of Gretchen Rubin’s The Happiness Project. I packed it in my suitcase for a holiday trip to the desert and discovered that, for me, it was the perfect kick in the butt to start off the new year and my own Resolution Project.

In 2008, staring out the window of a Manhattan bus, Rubin had a lightbulb moment: I had everything I could possibly want – yet I was failing to appreciate it. And she does have a charmed life – wife to the love of her life, two daughters, a loving extended family, a successful career as a writer after having started as a lawyer and clerk to Supreme Court Justice Sandra Day O’Connor. Nevertheless, she says she always expected to outgrow her limitations – she’d read Shakespeare and stop being afraid to drive. And she found herself bogged down in petty complaints and passing crises, sniping at her husband or the cable guy. She was haunted by the words of Colette: What a wonderful life I’ve had! I only wish I’d realized it sooner. And right there on an MTA bus, she decided to dedicate a year to trying to be happier – The Happiness Project.

By the next day, she had a pile of books on her desk and began investigating the question of what makes us happy. The former editor of the Yale Law Review over-researches everything – a quality with which I deeply identify. She dove into the subject of happiness with Plato, Thoreau, Martin Seligman, Daniel Gilbert, Tolstoy, Adam Smith, the Dalai Lama, Mihaly Csikszentmihalyi and the list goes on…  Then, she offered herself up as the subject.

For each month she chose a them that impacts happiness – friends, work, love, money, or energy, for example – and then broke it down into concrete action items to test-drive her theories. For example, for January’s theme of “Energy”, she set goals of going to sleep earlier, exercising, organizing, tackling a nagging task and acting more energetic. Because people are more likely to make progress when there is accountability, she created a calendar for each action item, giving herself a pass or fail checkmark each day.

One of the things I most admire about Rubin is the lengths to which she goes to contextualize and codify her life. In addition to her accountability calendar, she drafted Twelve Commandments (my personal favorite: Act the way I want to feel.); lists of Splendid Truths; Secrets of Adulthood (Bring a sweater.); a one-sentence daily journal for the precious memories she did not want to forget; and a blog.

Rubin, who also wrote The Four Tendencies: The Indispensable Personality Profiles That Reveal How to Make Your Life Better (and Other People's Lives Better, Too), would typecast me as a Rebel – someone who resists both outer and inner expectations. I’ve always admired people who map out their lives, who chart One-Year Plans or Five-Year Plans. But the ability to do that escapes me. I don’t want to hem myself in and, as a rebel, I’d just flout those goals in any case.

However… Rubin’s happiness journey really resonated with me. I identified with her. I have a wonderful life. But I’m often out of sorts with people and I complain – a lot. I call it my “Murphy Brown” syndrome, but it’s not as amusing as Candice Bergen playing the role. I wanted my life to feel more balanced and I did have some important goals to meet and one or two projects to complete. These often took a backseat emotionally to my experience and memories of parenting. Raising my daughter was simply the most delightful job I will ever have. The highlight of my life. But my daughter is now an adult. While we’re exceptionally close, moving a few of the too many eggs in my parenting basket into my role as a writer or wife wouldn’t jeopardize that loving relationship.

Even though my rebel self would ignore a calendar which requires a checkmark every day, I was captivated by many of Rubin’s tips, workarounds, and strategies and there was truth in her ideas on subjects such as parenting and money (though I’m definitely an over-buyer and do not relate to Rubin’s under-buyer tendencies). This made me trust her advice. More than once, I have heard her – I’m now a faithful follower of her podcast—invoke the old business school saw: “What gets measured gets managed.” And I know this from experience. I felt I’d benefit from thoughtfully writing down my some of my own Commandments, creating an Interest Log, and, yes, making some resolutions. Rubin’s approach, I thought, would allow me to set some yearlong goals without feeling like I was a slave to them -- and thus rebelling. They could be more like a cross between an aphorism and an ambition. Which would allow this Rebel to move further toward what I want.  In that spirit, here's to a happier 2019.