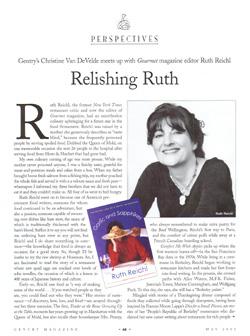 Ruth Reichl, the former New York Times restaurant critic and now the editor of Gourmet, had an unorthodox culinary upbringing for a future star in the food firmament. Reichl was raised by a mother she generously describes as "taste blind," because she frequently poisoned people by serving spoiled food. Dubbed the Queen of Mold, on one memorable occasion she sent 26 people to the hospital after serving food from Horn & Hardart that had gone bad.

My own culinary coming of age was more prosaic. While my mother never poisoned anyone, I was a finicky and wary eater, grateful for meat-and-potatoes meals and cakes from a box. When my father brought home fresh salmon from a fishing trip, my mother poached the whole fish and served it with a a veloute sauce and fresh peas -- whereupon I informed my three brothers that we did not have to eat it and they couldn't make us. All four of us went to bed hungry.

Ruth Reichl went on to become one of America's preeminent food writers, someone for whom food continued to be an adventure, but also a passion, someone capable of swooning over dishes like hare stew, the sauce of which is traditionally thickened with the hare's blood. Suffice it to say you will not find me ordering hare stew at any point, but Reichl and I do share something in common – the knowledge that food is always an occasion for a good story. So, though I'd be loathe to try the raw shrimp at Honmura An, I am fascinated to read the story of a restaurant where raw quail eggs are cracked over bowls of soba noodles, the occasion of which is a lesson in 400 years of Japanese history and culture.

Early on, Reichl saw food as a "a way of making sense of the world… If you watched people as they ate, you could find out who they were." Her stories of sustenance – of discovery, love, loss, and food -- are arrayed throughout her three memoirs. The first, Tender at the Bone: Growing Up at the Table, recounts her years growing up in Manhattan with the Queen of Mold, but also recalls their housekeeper Mrs. Peavey, who always remembered to make extra pastry for the Beef Wellington, Reichl's first trip to Paris, and the comfort of crème puffs while away at a French Canadian boarding school.

Comfort Me With Apples picks up where the first memoir leaves off – in the San Francisco Bay area in the 1970s. While living in a commune in Berkeley, Reichl began working in restaurant kitchens and made her first forays into food writing. In the process, she crossed paths with Alice Waters, M.F.K. Fisher, Jeremiah Tower, Marion Cunningham and Wolfgang Puck. To this day, she says, she still has a "Berkeley palate."

Mingled with stories of a Thanksgiving dinner composed of foods they collected while going through dumpsters, having been inspired by Frances Moore Lappe's Diet for a Small Planet, are stories of her "People's Republic of Berkeley" roommates who disdained her new career writing about restaurants for rich people and the heartbreaking tale of an unsuccessful adoption. And while others may let you see a part of their story with photographs, Reichl lets you taste it, punctuating the tales with recipes, like the Apricot Pie she made for her first husband as their marriage was falling apart and the recipe for Big Chocolate Cake that she used to woo her second husband.

Reichl has had the uncanny ability to be in the right place at the right time at every turn of the food revolution and when what began in Berkeley headed south to L.A. in the '80s, Reichl followed, becoming the L.A. Times restaurant critic. Ten years later, she got the gig of a lifetime in the food business as the restaurant critic for the New York Times, where her reviews of Japanese soba restaurants and Korean barbeque joints led her predecessor to launch a vicious letter-writing campaign to unseat her for the crime of democratizing food criticism.

The New York years are covered to hilarious and poignant effect in her just-released memoir, Garlic and Sapphires. Reichl cultivated a repertoire of disguises, dining out as a retired teacher from Michigan named Molly or red-headed Brenda in an orange tunic and green silk capris. Such was the power of a Times review that restaurants hung her picture in their kitchens and offered cash rewards to employees who could recognize her. And it is here as a restaurant critic that Reichl's ability to paint prose pictures of food is on full display: "…the geoduck was pure ocean – crisp and briny and incredibly clean – so that what I thought of was the deep turquoise waters of the Caribbean.." Flavor can't be described, says Reichl, but you can put someone in a space where they know exactly what you're talking about.

Once called the "Zelig"of the food world, today Reichl continues to chronicle the politics, sociology, business, pleasure and lore of food in the pages of America's oldest food magazine Gourmet, a magazine I would read if only for her Letter from the Editor each month. Because while I probably won't be ordering the geoduck clam, I want to be there to read the story about it.