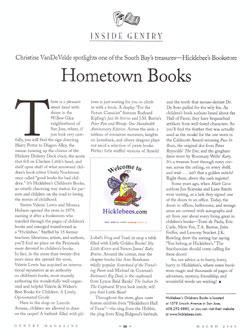 There is a pleasant street lined with shops in the Willow Glen neighborhood of San Jose, where, if you look very carefully, you will find the sign directing Harry Potter to Diagon Alley, the mouse running up the chimes of the Hickory Dickory Dock clock, the acorn that fell on Chicken Little's head, and shelf upon shelf of what renowned children's book editor Ursula Nordstrom once called "good books for bad children." It's Hicklebee's Children's Books, an utterly charming way station for parents and children on the road to loving the stories of childhood.

Sisters Valerie Lewis and Monica Holmes opened the store in 1979, naming it after a bookworm who traveled through the pages of children's books and emerged transformed as a "Hicklebee." Staffed by 15 former teachers, librarians, artists and authors, you'll find no place on the Peninsula more devoted to children's books. In fact, in the more than twenty-five years since she opened the store, Valerie Lewis has acquired an international reputation as an authority on children's books, most recently authoring the wonderfully well-organized and helpful Valerie & Walter's Best Books for Children: A Lively, Opinionated Guide.

Here in the shop on Lincoln Avenue, children are allowed to draw on the carpet! A bathtub filled with pillows is just waiting for you to climb in with a book. A display "For the Future Classicist" features Rudyard Kipling's Just So Stories and J.M. Barrie's Peter Pan and Wendy: One Hundredth Anniversary Edition. Across the aisle, a tableau of miniature monsters, knights on horseback and silvery dragons plays out amid a selection of pirate books. Perfect little stuffed versions of Arnold Lobel's Frog and Toad sit atop a table filled with Little Golden Books' Shy Little Kitten and Simon James' Baby Brains. Around the corner, near the chapter books like Ann Brashares wildly popular Sisterhood of the Traveling Pants and Michael de Guzman's Beekman's Big Deal, is the cupboard from Lynne Reid Banks' The Indian In The Cupboard. If you look inside, will you find Little Bear?

Throughout the store, glass cases feature exhibits from "Hicklebee's Hall of Fame" – the ring from the Hobbit, the plug from King Bidgood's bathtub, and the tooth that mouse-dentist Dr. De Soto pulled for the wily fox. As children's book authors heard about the Hall of Fame, they have bequeathed artifacts from well-loved characters. So you'll find the feather that was actually used as the model for the one worn in the Caldecott Award-winning Puss In Boots, the original dot from Peter Reynolds' The Dot, and the gingham dress worn by Rosemary Wells' Ruby. It's a treasure hunt through every corner, across the ceiling, on every shelf, and wait… isn't that a golden snitch? Right there, above the cash register!

Some years ago, when Math Curse authors Jon Scieszka and Lane Smith were visiting, as a lark they signed one of the doors to an office. Today, the doors to offices, bathrooms, and storage areas are covered with autographs and art from just about every living great in children's books -- Tomi de Paola, Eric Carle, Mem Fox, T.A. Barron, Jules Feiffer, Lemony Snicket. J.K. Rowling drew the sorting hat saying "You belong at Hicklebee's." The Smithsonian should come calling for these doors!

So, our advice is to hurry, hurry, hurry to Hicklebee's, where some bookstore magic and thousands of pages of adventure, mystery, friendship, and wonderful words are waiting!

Hicklebee's Childrens Books is located at 1378 Lincoln Avenue in San Jose, 408.292.8880, or you can visit their website at www.hicklebees.com.