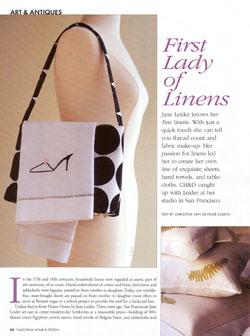 Jane Leider knows her fine linens. With just a quick touch she can tell you thread count and fabric make-up. Her passion for linens led her to create her own line of exquisite sheets, hand towels, and tablecloths. CH&D caught up with Leider at her studio in San Francisco.

In the 17th and 18th centuries, household linens were regarded as assets, part of the inventory of an estate. Hand-embroidered of cotton and linen, bed sheets and tablecloths were legacies, passed on from mother to daughter. Today, our wrinkle-free store-bought sheets are passed on from mother to daughter more often to serve as Roman togas in a school project or provide the roof for a backyard fort.

Unless they're from Haute Home by Jane Leider. Three years ago, San Franciscan Jane Leider set out to create modern-day heirlooms at a reasonable price -- bedding of 300-thread count Egyptian cotton sateen, hand towels of Belgian linen and tablecloths and napkins of Russian damask, all exquisitely hand-embroidered.

Haute Home was conceived when Leider, while living in Hong Kong, took a holiday in Vietnam, a trip she now describes as "life-altering". Bicycling through the countryside, she saw women sitting in groups, sewing, as water buffalo grazed in the background. "They were making the most beautiful tablecloths and clothing for their children," says Leider. "And I just fell in love with it. I felt as if it was something I was meant to work with. It was the strangest experience."

Back in Hanoi, Leider conducted a little research into embroidery factories, but then headed back to Hong Kong. There, the idea of bringing this beautiful handwork to the world continued to haunt her. "I couldn't get it out of my head," she says. Through a combination of what she calls "good luck and dogged determination," treks through the Trade Council of Hong Kong and the Vietnam Trade Relations Office, and some names provided by the American ambassador to Vietnam, Leider came upon the group that would sew for Haute Home, creating heirlooms of her design.

"We went eight hours north of Hanoi," she remembers, "driving in between rice terraces on cobble stone roads, to pagodas where the women and their children are sitting around in a sewing circle. It's a time warp. It's just amazing that in 2002 this art form still goes on. It's the same tried and true stitching from centuries ago. There is no way to update it. It is what it is. You would never get this tactile, raised, almost 3-D quality with a machine."

The embroidery requires a level of skill, preciseness and rigor that is belied by its cunningness and artistry. Each sunflower motif, for example, contains 100 French knots. Drawn work involves a complex process of removing individual threads and then twisting them together -- imagine a spider and its web!

Although there is fine handwork from China, India, Madagascar and Madeira off the coast of Portugal, Leider considers Vietnam to be the zenith of hand embroidery. "Every country has a different style. There is a different tension and sensibility to the hand. If we had pieces sitting out here, you would definitely see the differences," she says. "But there is something about Vietnam being a former French colony. It is in their blood, the people that sew, this French sensibility and style."

A prolific designer, Leider produces a new line for Haute Home twice a year, each spring and fall, fashioning both traditional and modern motifs. There are pristine white-on-white monograms, lavish botanical motifs of ferns and berries and vines, and the delightful sunflower with its center of French knots. But there are also geometrics, a classic harlequin pattern and sophisticated polka dots, as well as witty motifs of topiaries, Belgian loafers and salon chairs. "I just try to be contemporary," she says.

Once her artwork is complete, a piece of fabric is laid out and the design is drawn onto it with a tracing pen -- it's like creating an architectural blueprint. That piece of fabric is then flipped facedown over the fabric that will comprise the duvet or tea towel and it is gone over with a damp sponge, thereby transferring the ink. The blueprint for hand embroidering is now in place. Then, the colors are chosen and stitching commences. It takes a team of eight women five weeks to complete a duvet.

Although stores stock her tea towels, boudoir pillows and other items, Haute Home is primarily a made-to-order business. The people who want Leider's pieces are willing to wait for these works of art, which is just what she had in mind when she looked out at today's chain store mentality. "The world is so mass-produced now, but that comes at a price. It takes the specialness out of it," she says. "I'd rather wait a little longer and have something more unique, what I call a 'personal' product. That's where I'd like to live my life and that's the world I want to shop in and it's getting harder to find."

In addition to Haute Home, Leider does a considerable private label business, designing and creating linens for Martha Stewart, Ralph Lauren, Burberry, and Waterworks, among others. "I'm trying to create my own brand, of course," says Leider, "but it takes time and an incredible amount of money. The private label work is helping me to grow my business. And it's a fun collaboration."

A "textile junkie", who relaxes by researching embroidery techniques, she says she herself is a total klutz with needle and thread. She has, however, spent her entire career at fashion magazines and in retail. Raised in the Midwest, she bought a one-way ticket to New York after graduation from college, where she quickly landed a position as Fashion Consultant for E.F. Hutton in the heyday of the "Dress for Success" era. Fashion editorial positions followed at Redbook, Glamour and McCall's magazines. When she turned 30, her father invited her to leave the "debutante business" of women's magazines, so-called because these positions are much in demand, but traditionally low-paying.

It was then that she relocated to San Francisco, becoming Fashion Director at Macy's/Bullock's West. There, she married and relocated to Hong Kong, when her husband took a job there. She convinced David Tang, the owner of Hong Kong's Shanghai Tang, the chic luxury retailer, to expand his home furnishings department. That move allowed her to travel throughout Asia, the "Candyland" of handicrafts. "I cut my teeth on their nickel," Leider says. "But after a year, I said it's time for me to do something myself." She started Chinois Trading, selling toile china, campaign trays, baskets and other home accessories. With that experience, she learned about manufacturing, shipping, customs and design. Then, shortly before she returned to San Francisco, she took her "life-altering" holiday in Vietnam.

Now a working mother with a two-year-old daughter, Leider and her husband have restored a 1903 Edwardian home in Pacific Heights, where the scene after a dinner party is right out of Gosford Park -- only it's not the servants, but Leider and her husband gathering up all of the linens and getting the Spray 'n Wash going.

"People sometimes fear my linens," says Leider. "How many times have I heard, 'Oh, I have kids and a dog, I can't have that bedding.' And I say, 'Yes, you can.' It's fabric. It will wash. When you buy this product, I want you to use it. Don't put it in a plastic bag for Easter or Christmas. Linens get better with age, particularly the big pieces. The linen breaks down and gets so soft. It's meant to be lived with." And passed on from mother to daughter.

Haute Home by Jane Leider linens are available at: Scheuer's Linens, Gump's and Bath Sense in San Francisco; It's Cactus in Carmel; Jubilee in Lafayette; Butera Home Collection in Newport Beach; Magnolia's in Riverside; and Room With A View in Santa Monica.