Inside the Menlo Charity Horse Show 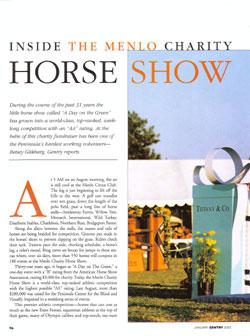 During the course of the past 31 years the little horse show called “A Day on the Green” has grown into a world-class, top-ranked, weeklong competition with an “AA” rating. At the helm of this charity fundraiser has been one of the Peninsula’s hardest working volunteers – Betsey Glikbarg. Gentry reports.

At 5 a.m. on an August morning, the air is still cool at the Menlo Circus Club. The fog is just beginning to lift off the hills to the west. A golf cart trundles over wet grass, down the length of the polo field, past a long line of horse stalls -- Strideaway Farms, Willow Tree, Monarch International, Wild Turkey, Dearborn Stables, Charlebois, Northern Run, Bridgeport Farms.

Along the alleys between the stalls, the manes and tails of horses are being braided for competition. Grooms put studs in the horses' shoes to prevent slipping on the grass. Riders check their tack. Trainers pace the aisle, checking schedules, a horse's leg, a rider's mood. Ring crews set fences for jumps in three arenas where, over six days, more than 550 horses will compete in 180 events at the Menlo Charity Horse Show.

Thirty-one years ago, it began as "A Day on The Green," a one-day event with a "B" rating from the American Horse Show Association, raising $3,000 for charity. Today, the Menlo Charity Horse Show is a world-class, top-ranked athletic competition with the highest possible "AA" rating. Last August, more than $280,000 was raised for the Peninsula Center for the Blind and Visually Impaired in a weeklong series of events.

This premier athletic competition -- horses that can cost as much as the new Enzo Ferrari, equestrian athletes at the top of their game, many of Olympic caliber, and top-notch, star-turn trainers -- has been run for all of its thirty-one years by a steely-eyed, perfectly put together suburban housewife and inveterate volunteer named Betsey Glikbarg. In another time and place, she might have run a television network, so carefully attuned is she to entertainment value and the bottom line.

Every day, two to three thousand spectators arrive to watch the competition in Olympic-style show jumping. More than $95,000 in prize money was awarded in special classes -- from the $500 Pony Jumper Classic, a purely athletic test of speed and endurance, in which the rider and pony are judged solely on their ability to jump a series of fences from 2'9" to 3' -- to the $10,000 Grand Hunter Challenge, where Champion and Reserve Champion thoroughbreds are judged on the pace and style in which they complete a round of 12 fences, up to 4-feet in height.

And every day thousands of ribbons from first place royal blue through twelfth place lavender are awarded in classes for pony hunters, children's hunters, adult amateur hunters, and equitation and medal classes, in which the rider, not the horse, is judged on form. Over the six days of the show, more than 8,000 ribbons, trophies and award prizes are handed out in class competitions, division championships and special presentations. On Alfred Hitchcock Day, there are even polo shirts, watches, and, for the horses, wool coolers all bearing the unmistakable profile of the master filmmaker. The Menlo Charity Show is the only show in California where second and third place winners are awarded prizes -- coveted jars of Goelitz Jelly Bellies and Mrs. Pasture's Cookies for Horses.

The competition culminates in two highly anticipated and demanding contests set in the jumper ring, with its boldly styled jumps bearing the logos of sponsors like Tiffany & Co., jumps whose standards feature 5'-tall versions of its trademark blue boxes. On Friday night, local professional Guy Thomas of Willow Tree Farms took first, second and third place in the $10,000 Maple Leaf Farm Ryman Memorial Speed Jumper Class, an electrifying competition conducted at breakneck speed. Then, on Saturday evening, the $35,000 San Jose British Motors Grand Prix took place. The Grand Prix is the highest form of an equestrian contest, an exacting match of speed and technical accuracy over a course of 12 to 14 jumps that can surpass 6 feet in height.

Glikbarg would be the first person to tell you that none of this would happen without her 140 tireless, cheerleading committee members. And they do deserve credit. Most volunteers sign on for an event, not a six-day acclaimed equestrian competition and a weeklong series of events -- beginning with Tuesday's poolside spaghetti dinner for 500, through cocktails, hors d'oeuvres and wine tasting on Wednesday, Thursday's Iron Gate Restaurant dinner, and Saturday's banquet honoring the World Champion Hunter Rider Award winners.

Consider just some of the logistics involved in a production of this magnitude. The thousands of prizes from leather bridles and Baccarat crystal to groom boxes and silver champagne buckets are coordinated so that there is no chance any entrant will win two of the same prize. More than 200 signs for parking, information and directions are printed and posted. More than 600 stalls must be delivered, erected, provisioned with electricity and stocked with feed and bedding. Each of the 550 horses produces 50 pounds of manure each day, so 27,500 pounds of manure must be carted away and disposed of every night. Ninety potted plants in the VIP tent and 200 in the arenas need to be watered daily. Parking must be found for more than 100 horse vans and trailers in the middle of Atherton. And each day, 54 snacks and lunches are delivered to the 18 show judges, 500 dinners are served to trainers, exhibitors, spectators and grooms, 300 buffet lunches are provided in the Club, and countless hot dogs and smoothies are sold from vendor stands.

And remember -- Betsey Glikbarg, for one, never forgets this -- that the bottom line of all this entertainment is that the Menlo Charity Horse Show is a fundraiser for the Peninsula Center for the Blind and Visually Impaired. The Center, founded in 1936, serves more than 1,000 clients in San Mateo and Santa Clara counties, with optical aids, mobility training, daily living skills instruction and Braille classes. They receive 100% of the proceeds from sales of the horse show program and the Friday night dinner dance and auction, which this year featured a luxury suite for an Oakland Raiders game, a canal cruise through France, and a horseback tour of Ireland's Connemara trail. Two pre-show events -- an evening at Ralph Lauren at Stanford Shopping Center and Breakfast at Tiffany's, a delightful morning of croissants and jewelry shopping -- benefit the Center, as well.

Chief among Glikbarg's secrets of success are her horse show managers, Walter and Debbie Haub, and the five other founding members of the show, who continue to serve on the committee -- Jane Yates, Nancy Robinson, Nan Chapman, Phyllis Fletcher and Nancy Parker. To a woman, though, they describe Betsey Glikbarg herself as the real secret to the stellar success of this event.

But all six of them contribute mightily to its seamless production, sharing an attitude that assures its continued success -- they're not afraid to spend money to make money and they never forget who their "customers" are: the exhibitors, the sponsors and the Peninsula Center for the Blind and Visually Impaired.

Each morning and evening, a golf cart visits the long line of stalls, carrying coffee, juice, donuts and cookies for the grooms, as well as any nearby children. Exhibitors receive goody bags from San Jose British Motors filled with Mother's Cookies, horse shampoo, a commemorative mug, mints, Jaguar hats, and notepads. Trainers are honored with a commemorative gift -- a silver box adorned with a Menlo Charity Show medallion. And in Saturday's lead line competition for the youngest riders, every child who shows up receives a blue ribbon and a teddy bear.

Sponsors like Deutsche Bank, Ann Fay Barry, BFI, Maple Leaf Farm, Pat Hitchcock O'Connell, San Jose British Motors and Wild Turkey Farm are feted at two pre-show receptions. The event holds such cachet that both the Oakland Raiders and the San Francisco 49ers are sponsors. And every morning, at 5 a.m., you'll find founding committee member Jane Yates at the VIP tent, making sure the donated prizes are displayed to their best advantage -- piles of Tiffany & Co.'s signature boxes, Baccarat crystal, framed Hermes scarves, silver picture frames from Ralph Lauren, luxe surprises from Wilkes-Bashford and big boxes from Bloomingdale's. Each award is beautifully gift-wrapped and when the winners open them, they find a card inside with the name and address of the donor, who, a week later, should receive a thank you note.

The Peninsula Center for the Blind and Visually Impaired receives a check -- this year for more than $280,000, with a personal note from Glikbarg, as does every participant in the show. That personal touch is integral to the event and belies another aspect to Betsey Glikbarg, which is harder to glimpse behind all the effort and success -- her warmth. It's explains her knack for getting people involved and keeping them on the team and it's the reason that everyone involved with the show acknowledges her as a leader and prizes her as a friend. At 5 a.m. on an August morning, she's the lady driving the golf cart, making sure everything is on course.