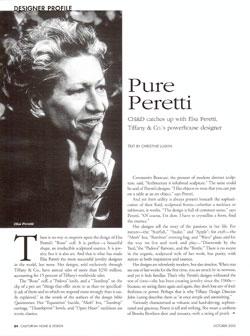 There is no way to improve upon the design of Elsa Peretti's "Bone" cuff. It is perfect -- a beautiful shape, an irreducible sculptural essence. It is jewelry, but it is also art.

And that is what has made Elsa Peretti the most successful jewelry designer in the world, bar none. Her designs, sold exclusively through Tiffany & Co., have annual sales of more than $250 million, accounting for 15% of Tiffany's worldwide sales.

The "Bone" cuff, a "Padova" knife and a "Teardrop" on the clip of a pen are "things that offer more to us than we specifically ask of them and to which we respond more strongly than is easily explained," in the words of the authors of the design bible Quintessence. Her "Equestrian buckle, "Mesh" bra, "Teardrop" earrings, "Thumbprint" bowls and "Open Heart" necklaces are iconic classics.

Constantin Brancusi, the pioneer of modern abstract sculpture, said, "Architecture is inhabited sculpture." The same could be said of Peretti's designs. "I like objects to wear that you can put on a table as an art object," says Peretti.

And yet their utility is always present beneath the sophistication of their fluid, sculptural forms -- whether a necklace or tableware, it works. "The design is full of common sense," says Peretti. "Of course, I'm slow. I have to crystallize a form, find the essence."

Her designs tell the story of the passions in her life. For nature -- the "Starfish," "Snake" and "Apple"; for craft -- the "Mesh" bra, "Bamboo" evening bag and "Wave" glass; and for the way we live and work and play -- "Diamonds by the Yard," the "Padova" flatware and the "Bottle." There is no excess in the organic, sculptural style of her work, but purity, with nature as both inspiration and essence.

Her designs are relentlessly modern, but also timeless. When you see one of her works for the first time, you are struck by its newness, and yet it feels familiar. That's why Peretti's designs withstand the test of time -- she has been creating jewelry since the 1960s -- because, on seeing them again and again, they don't lose any of their freshness or power. Perhaps that is why Tiffany Design Director John Loring describes them as "at once simple and astonishing".

Variously characterized as volcanic and hard-driving, sophisticated and gracious, Peretti is tall and striking. She wears a uniform of Brooks Brothers shirt and trousers, with a string of pearls and her own platinum heart earrings. "Style," she says in heavily accented English, "is to be simple."

Born in 1940 in Florence, Italy, Peretti's father was a successful businessman, who founded the Italian oil company, API. Her mother was an aristocrat. Educated in Rome and Switzerland, she "ran away from all that," she says, and found work as a model, first in Barcelona and then in New York. By 1969, she had formed a professional and personal relationship with the "architect of '70s style" -- Halston.

Halston's most famous client was, of course, Jacqueline Kennedy, for whom he designed the pillbox hat she wore to her husband's inauguration. He dressed movies stars, hipsters, socialites and models -- Elizabeth Taylor, Bianca Jagger, Princess Grace of Monaco and Peretti -- in his signature sleek, impeccably tailored clothes. His minimalism greatly influenced Peretti.

While in Spain, she began to design jewelry. When the American designer Giorgio di Sant'Angelo used a few of her pieces in one of his shows, they were a hit. Halston, who became a lifelong friend of Peretti's -- she inherited his Manhattan apartment -- also became a collaborator. It was for Halston that Peretti designed the "Bottle" -- a necklace from which dangled a beautifully crafted sterling silver perfume flacon.

It's a matter of dispute as to who first brought Peretti and her jewelry to the attention of Walter Hoving, then chairman of Tiffany & Co. The legendary fashion editor Carrie Donovan took credit for it, saying that she immediately recognized Peretti's genius. At that time, however, Tiffany & Co., "America's premier purveyor of jewels and luxury goods" didn't offer silver jewelry for sale. Tiffany & Co. sold the kind of jewelry -- gold and gems -- that men bought for their wives. (Mistresses, it was said, were bought for at Harry Winston.) Consequently, there was also very little jewelry for the young when Peretti came along.

But part of Peretti's genius is her insight into the consumer. She recognized that women, young women, were beginning to buy jewelry for themselves. Hoving, meanwhile, recognized Peretti's work as a sign of the times. Thus began the "democratic vision of luxury" at Tiffany & Co. Today, the company offers more than 1,000 pieces from Peretti. "It's like an unlikely marriage that works," says Tiffany Vice President Frank Arcaro. And Peretti still operates with that keen sense of her customer -- creating pieces at every price point from the $45 heart paperweight to the $100,000 4-carat "Diamond on a Wire". "My objective is to design according to one's financial possibilities," she says.

Peretti divides her time between her pied-a-terre in Manhattan, a home in Rome and a 13th-century tower by the sea at Porto Ercole. In the small Spanish village of Sant Marti Vell, she has restored a group of buildings which house her museum, filled with a mix of art and common objects that provide inspiration -- a painting by Warhol, Chinese bird cages, a table of bottles, a showcase of ivory and lacquer.

"All my work comes out of my life," says Peretti. "I'm gifted and see lines and shapes where no one else does."