How To Raise An Adult: Break Free of the Overparenting Trap And Prepare Your Kid for Success 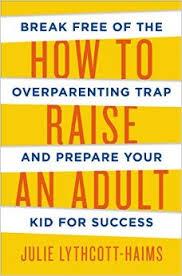 All parents are amateurs. So we turn to the "experts" to answer our questions about vaccinations and sleep schedules and developmental milestones, as well as the more cosmic queries we wrestle with: Will my child be happy? Will my child fit in? Will my child succeed?

More than 50 million copies of Dr. Benjamin Spock's "Baby and Child Care" have been sold since its prescription of pragmatism and Freudian psychology was published in 1946. The search for parenting gurus and guiding hands continued with Penelope Leach, T. Berry Brazelton and John Rosemond. Today, there is parent Heidi Murkoff of the "What to Expect" series, psychologists Madeline Levine and Wendy Mogel, pediatrician and sleep shaman Richard Ferber and teen expert Rosalind Wiseman, author of "Queen Bees and Wannabes."

Julie Lythcott-Haims will likely be the latest to join that canon of parenting guidance, with "How To Raise An Adult: Break Free of the Overparenting Trap And Prepare Your Kid for Success." Drawing on her own experience as a parent and former dean of freshmen at Stanford University, the latest research, and interviews with teachers, employers and Silicon Valley heavyweights, Lythcott-Haims examines the crippling practice of overparenting and its consequences. "Parents protect, direct, and handle so much for children today that we prevent them from the very growth that is essential to their development into adult human beings," she writes.

At Stanford, Lythcott-Haims was known for a mix of expertise and empathy that made her masterful with parents and helpful to students. It was as dean of freshmen she found herself regularly interacting with "students who seemed increasingly reliant upon their parents in ways that felt, simply, off." She understood overinvolved parents were acting out of love. But what those parents might not have understood is the high price paid by their children for that "parenting failure," as Lythcott-Haims calls it. Students who have had all life paths cleared for them are unable to advocate for themselves or cope with setbacks, are more prone to depression, anxiety and drug use (especially "study drugs"), lack simple life skills such as juggling academics and outside activities or managing money, and — more important — have a fear of failure that requires the dangerous strategy of always, always playing it safe.

Like the Harvard-trained lawyer she is, Lythcott-Haims solidly builds the case for how the Blackhawk helicopter parent became the "popular kid we want to follow, or the bully we have trouble standing up to because we fear being harmed, ridiculed, or left out." She thoughtfully examines the cultural shifts and whims that got us to this point: overblown fears of "stranger danger," the self-esteem movement where everybody gets a trophy, the thought contagion of bullying, the relentless competitiveness of a parent class needlessly concerned about leveling the playing field and the overscheduled, checklisted childhood resume that boasts the "right" schools, sports and extracurriculars for the college admission arms race.

The college admission process takes up a fair amount of oxygen in the book, probably because it's a big cog in the hamster wheel of the overmanaged child. After all, it's the highly visible payoff at the end of parents' 17 years of overinvestment. Lythcott-Haims had to deal with it, especially considering her former affiliation with one of the Holy Grail universities. Her deep compassion for the young people enduring the endemic stress of that process shines through and her advice about broadening the mindset of applicants — and parents — is solid. But this is the weakest part of a strong book, with the author at times relying more on opinion than fact when it comes to the specifics of college admission, such as testing.

Lythcott-Haims' advice is most valuable when it gets down to the brass tacks of how to cultivate a parenting style that produces a resilient, resourceful grownup. As the psychoanalyst John E. Gedo has noted, it is not the parents' job to raise a doctor or a lawyer or a senator, but to raise a child who can live independently. In this longest section of the book, Lythcott-Haims takes a broad look at the building blocks of autonomous adulthood — including unstructured time, learning as opposed to "doing school," and letting kids flail in the deep end of life's mistakes whether it's poor grades or not making varsity. This is the stuff of the best parenting advice — stern common sense we immediately recognize as the right thing to do once it's articulated. Chores build a work ethic — of course!

Throughout this section of the book, she provides step-by-step instructions, talking points, and lists, lists, lists of actions parents can take to stop hovering and start helping. This practicality is also the hallmark of the best parenting books. As an especially critical part of this, she translates into practical terms many of the popular parenting conceits and slogans. What, exactly, does "just do your best" mean? Why does its use lead, paradoxically, to a damaging perfectionism? And just exactly how do we mix the perfect parental cocktail of high expectation and solid support? These are things worth knowing.

Clocking in at more than 300 pages, Lythcott-Haims' book covers a lot of territory. I'm hoping that won't discourage readers, because this book has substantial — and relevant — advice for parents of toddlers, teens, and 20-somethings, quite a feat in this genre. The book is heavily anecdotal, which makes it relatable and easy to read. It's clear Lythcott-Haims (who is a sister-in-law of Tribune commentary editor Marcia Lythcott) has thought long and hard about all of this, but she never lapses into the lecturing or academic tone some parenting books can take. Reading her book is more like having a good conversation with a like-minded friend who just happens to have had thousands of interactions with young people and is also a whiz at research. And it's all the more refreshing among advice books because she is candid about her own struggles as a parent, trying to find the balance between her fears and hopes and the dreams of the two teenagers she is raising. It's heartening to find the author of a parenting book who doesn't hold herself out as a paragon.

But those anecdotes! Some of them are the stuff of every parent's nightmares. Diagnostic testing for students so they can receive extra test time. Mothers medicated for anxiety. The tracking of college-aged children by GPS. Parents who complete their child's homework and then argue with the teacher about the grade. The flaunting of children's brand-name college admissions in a bid for social status. "Redshirting" children so they begin school later in order to be more competitive in sports.

Readers will need to keep in mind where Lythcott-Haims is writing from. I lived in the heart of Silicon Valley for 27 years and raised a daughter there, and reading this book at times felt like a flashback from a bad trip. The Valley is ground zero for high pressure, overinvolved parenting, the scorched earth convergence of status, uber-wealth, influence and power. In Palo Alto, where the author lives, four teenagers have committed suicide in the last eight months, reprising an earlier cluster in 2009 and 2010.

Granted, "How To Raise an Adult" is likely speaking to parents who have the time and money to do too much for their children, but it's a worthwhile read for every parent. It's full of just plain good advice and, if nothing else, will provide moral courage for those parents who are already doing the right thing and standing up to the overinvolvement bullies.

As parents, we want our children to be happy and we do things to make it so. But childhood and adolescence are not all rainbows and ponies and a walk on the beach. Every day, there are choices to make, people you have to learn to get along with, disappointments and challenges to overcome. Our children are engaged in the serious work of becoming an adult. With this book, Lythcott-Haims provides the missing user manual.

Christine VanDeVelde's is a writer and journalist whose work has appeared in The New York Times, Wall Street Journal, Washington Post, USA Today, Parenting and Self. She is the co-author of the best-selling book "College Admission: From Application to Acceptance, Step by Step."