Frank Bruni's Where You Go Is Not Who You'll Be" 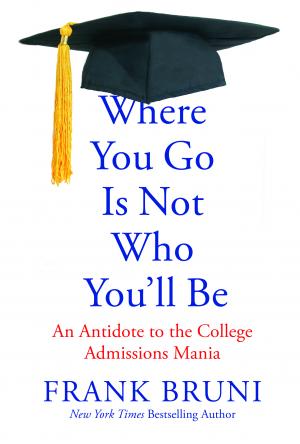 Christine VanDeVelde
Book Review
Where You Go Is Not Who You'll Be: An Antidote to the College Admissions Mania
by Frank Bruni

A parent comes in to talk with a counselor in the College and Career Center of a suburban high school. She has some questions about college admission. A few minutes into the conversation, the parent says, “Let me go get my son, I want him to hear this.” Whereupon she brings into the office her 18-month-old child.

This is a true story. In certain zip codes in America, the mass psychosis of college admission starts early and settles in to stay -- at every dinner party, in the carpool lane, on the soccer sidelines and in the offices of college counselors -- from the age of 18 months and for the next sixteen years.

In Where You Go Is Not Who You'll Be: An Antidote to the College Admissions Mania, the New York Times' columnist and author Frank Bruni takes on the frenzy's underlying articles of faith, exposing as myths the beliefs that there are only ten worthy colleges in America, that this is the most important decision of a child's life, and that those who don't get their ticket punched for the Harvard gravy train are doomed. And he does this with such finesse and such honest, accessible writing that he will have the gratitude of anxious parents everywhere. He should also be knee-deep in mash notes from every high school college counselor and most -- though not all -- deans of admission.

There's no question applying to college has changed in the last twenty years.  About 3.3 million students will graduate from high school this year -- and more of them want to go to college than ever before. Applying online has made it easier to apply to more schools -- more than 800,000 individual applicants from the class of 2014 submitted 3.5 million applications through the Common Application. And there's greater interest in college because it's seen as key to economic success in an increasingly competitive world. All these factors taken together help explain why it seems like it's harder to get into college now than ever before.

Yet the reality is that most colleges admit about 70% of their applicants. So why the frenzy?  Bruni points to the over-emphasis on admission to the Winner's Circle of a very small number of elite colleges and universities -- status symbol schools where the average rate of acceptance hovers around only 7%.  This illustrates, he says, "just how ridiculously narrow the thinking about higher education can be, especially by parents and kids with enough resources and ambitions to be finicky about the schools they consider applying to."

Throughout the book, Bruni undercuts the pillars that prop up this pursuit of prestige -- the status-mongering, the marketing that sells colleges like Madison Avenue sells iTunes and Tide, the excessive media attention rained on the top ten colleges, and the "best-ism" of the rankings, especially the U.S. News & World Report's annual list, known in higher education circles as the "Sports Illustrated swimsuit edition." Bruni spells all this out so well that he may inadvertently inflame what he's trying to assuage: readers can start to feel a little overwhelmed. An entire chapter, for example, looks at the high stakes jockeying of applicants that has created a "cult of the expert" with batting coaches for 12-year-olds, SAT tutors who charge $300 an hour, and private consultants hired to create a slick sales pitch on every page of an application.

No question these are the preoccupations of a minority of American families, which Bruni admits. But they're a vocal minority, whose concerns are the push behind a $4 billion-a-year test prep industry, a tripling of the ranks of private consultants in the last five years and an avalanche of applications to what seem like the only ten colleges in America. And for the rest of American families, it's a reality that this fanatical minority is part of the competition.

So if all of this leaves most parents feeling like the system is rigged, what Bruni does best in this book is provide a reality check of surveys, statistics and stories that proves the axiom: "It's not which college you go to, it's what you do when you get there." It's in the success stories of Starbucks founder Howard Schultz, YA novelist sensation John Green, former Secretary of State Condoleezza Rice and many more that Bruni is at his most convincing,  demonstrating that success in life is the result of the effort of an individual, not an elite education. Did you know, for example, that more than half of the winners of MacArthur Foundation "genius grants" hail from schools whose names don't show up on any "Ten Best" lists?

The lure of getting into the colleges that everybody wants to go to is understandable. But students should really be pushing themselves to look hard at what they care about and which school is going to provide that. This book has some very good advice for students about how to scratch beneath the surface of what schools have to offer in order to get the best education, whether it's once-in-a-lifetime internships like Villanova University's Vatican program or the chance to create your own major as makeup mogul Bobbi Brown did at Emerson College. And if students want to apply to one of those ten most exclusive colleges in America, that's fine -- as long as they have a tolerance for rejection.

"Where You Go Is Not Who You'll Be" is, for the most part, evenhanded, a rare thing in the crowded field of college admission books. But Bruni errs in quoting at length from author William Deresiewicz's frequent writings which characterize students at Ivy League colleges as the dull but accomplished, risk-averse and entitled, marching in lockstep toward careers on Wall Street. It's not true, and it's not necessary to tear down the Ivies in order to make the point that there are terrific colleges among the more than 2,200 four-year institutions out there. And he belabors the subject of legacies -- the offspring of alumni -- saying favoritism flourishes. But legacy status never assures acceptance, and typically helps only scions who are competitive with other capable candidates.

What comes streaming through, though, is Bruni's great compassion for the students caught up in all this craziness. He has written a book that will broaden the conversation, make it a little saner, and go a long way toward helping parents maintain perspective, even in a world where 18-month-olds are prepped for Princeton.

Christine VanDeVelde is a writer and journalist whose work has appeared in The New York Times, Wall Street Journal, Washington Post, USA Today, Parenting and Self. She is the co-author of the best-selling book "College Admission: From Application to Acceptance, Step by Step."

"Where You Go Is Not Who You'll Be"