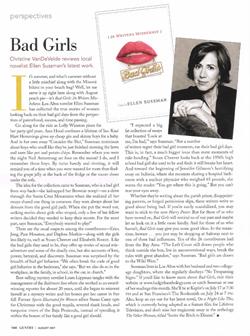 It's summer, and what's summer without a little mischief along with the Missoni bikini in your beach bag? Well, let me serve it up right here along with July's peach pie -- it's Bad Girls: 26 Writers Misbehave. Los Altos novelist Ellen Sussman has collected the true stories of women looking back on their bad girl days from the perspectives of parenthood, success, and time passing.

Go along for the ride as Lolly Winston pines for her party-girl years. Ann Hood confesses a lifetime of lies. Kaui Hart Hemmings gives up cheap gin and skinny boys for a baby. And in her own essay "Consider The Slut," Sussman reminisces about boys who smell like they've just finished mowing the lawn and taste like pot and potato chips. Remember where you were the night Neil Armstrong set foot on the moon? I do and I remember those boys. By turns bawdy and riveting, it will remind you of a time when you were wanted for more than finding the grape jelly at the back of the fridge or the soccer shoes under the sofa.

The idea for the collection came to Sussman, who is a bad girl from way back -- she kidnapped her Brownie troop! -- on a drive through the Santa Cruz Mountains when she realized all her essays shared one thing in common: they were always about her detours from the good girl path. When she put the word out, seeking stories about girls who strayed, only a few of her fellow writers decided they needed to keep their secrets. For the most part, says Sussman, "Everybody wanted to play!"

There are the usual suspects among the contributors -- Erica Jong, Pam Houston and Daphne Merkin -- along with the girls less likely to, such as Susan Cheever and Elizabeth Rosner.  Like the bad girls they used to be, they offer up stories of sexual misadventure and some of the deadly sins, but also accounts of love, power, betrayal and discovery. Sussman was surprised by the breadth of bad girl behavior. "We often break the code of good girl behavior in the bedroom," she says. "But we also do so in the workplace, in the family, in school, in the car, in church."

Best-selling mystery novelist Laura Lippman tangles with the management of the Baltimore Sun where she worked as an award-winning reporter for almost twenty years, until she began to reinvent herself as a mystery writer and her bosses put her career in free fall. Former Sports Illustrated for Women editor Susan Casey opts for Christmas with the good tequila, severed shark heads and turquoise rivers of the Baja Peninsula, instead of spending it within the bosom of her family like a good girl should.

"I expected a big fat collection of essays that boasted 'Look at me, I'm bad,'" says Sussman. "But a number of writers regret their bad girl moments, rue their bad girl days. This is, in fact, a much bigger issue than mere moments of rule-bending." Susan Cheever looks back at the 1950's high school bad girl she used to be and finds it still breaks her heart. And toward the beginning of Jennifer Gilmore's horrifying essay on bulimia, where she recounts sharing a hospital bathroom with a nuclear physicist who weighed sixty-five pounds, she warns the reader: "You get where this is going." But you can't tear your eyes away.

Whether they're writing about the parish priest, disappointing parents, or forged permission slips, these writers write so good about being bad. If you're easily scandalized, you may want to stick to the new Harry Potter. But for those of us who have moved on, Bad Girls will remind us of our past and maybe let us look on it a little more kindly. And for those of us who haven't, Bad Girls may give you some good ideas. In the meantime, beware...  you just may be shopping at Safeway next to one of these bad influences. Ten of the twenty-six contributors hail from the Bay area. "The Left Coast still draws people who think outside the box, live in unconventional ways, break the rules with great abandon," says Sussman. "Bad girls are drawn to the Wild West."

Ellen Sussman lives with her husband and two college-age daughters in Los Altos, where she regularly disobeys "No Trespassing Signs." If you'd like to know more about Bad Girls, visit their website at www.badgirlsanthology.com or catch Ellen at one of her readings this month. She'll be at Kepler's on July 17th at 7:30 p.m. and at San Francisco's The Booksmith on July 24th at 7 p.m. Also, keep an eye out for her latest novel, On A Night Like This, which is currently being adapted as a feature film for Lifetime Television, and don't miss her tragicomic essay in the anthology The Other Woman, titled "Invite the Bitch to Dinner."