Perils and Pitfalls of College 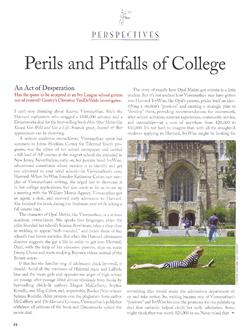 An Act of Desperation
Has the quest to be accepted at an Ivy League school gotten out of control? Gentry's Christine VanDeVelde investigates.

I can’t stop thinking about Kaavya Viswanathan. She's the Harvard sophomore who snagged a $500,000 advance and a Dreamworks deal for the best-selling book How Opal Mehta Got Kissed, Got Wild and Got a Life. Sounds great, doesn't it? But appearances can be deceiving.

A serious academic overachiever, Viswanathan spent her summers in Johns Hopkins Center for Talented Youth programs, was the editor of her school newspaper and carried a full load of AP courses at the magnet school she attended in New Jersey. Nevertheless, early on, her parents hired IvyWise, educational consultants whose mission is to identify and get you admitted to your ideal school – in Viswanathan’s case, Harvard.  When IvyWise founder Katherine Cohen saw samples of Viswanathan’s writing, she urged her to showcase it in her college applications, but also went so far as to set up a meeting with the William Morris Agency. Viswanathan got an agent, a deal and received early admission to Harvard. She finished the book during her freshman year while taking a full courseload.

The character of Opal Mehta, like Viswanathan, is a serious academic overachiever. She speaks four languages, plays the cello, founded her school’s Science Bowl team, takes a shop class in welding to appear well-rounded, and heads three of her school’s four honor societies. But when the Harvard admissions director suggests she get a life in order to get into Harvard, Opal, with the help of her obsessive parents, slips on some Jimmy Choos and starts studying Beyonce videos instead of the Bronte sisters.

If that has the familiar ring of adolescent chick lit -- well, it should. Amid all the mentions of Habitual jeans and LaPerla bras and the mean girls and opposite sex angst of high school are passage after passage lifted almost wholesale from books by best-selling chick lit authors Megan McCafferty, Sophie Kinsella, and Meg Cabot, and, improbably, Booker Prize winner Salman Rushdie. After protests over the plagiarism from author McCafferty and the Harvard Crimson, Viswanathan’s publisher withdrew all editions of the book and Dreamworks spiked the movie deal.

The story of exactly how Opal Mehta got written is a little unclear. But it’s not unclear how Viswanathan may have gotten into Harvard. IvyWise, like Opal’s parents, prides itself on identifying a student’s “passions” and creating a strategic plan to "develop" them, providing recommendations for coursework, after-school activities, summer experiences, community service and internships – at a cost of anywhere from $20,000 to $30,000. It’s not hard to imagine that, with all the straight-A students applying to Harvard, IvyWise might be looking for something that would make the admissions department sit up and take notice. So, writing became one of Viswanathan’s “passions” and IvyWise became the promoter for the publishing deal that certainly helped cinch her early admission. Some might think that was worth $20,000 or so. Never mind that Viswanathan later revealed in several interviews that she only vaguely thought of becoming a writer and really wanted to be an investment banker. As Kurt Andersen wrote in New York magazine, Viswanathan is “a flagrant example of the hard-charging freaks that our culture grooms and prods so many of its best and brightest children to become.”

That may sound a little harsh. But don’t think that this isn’t happening right in your own backyard. My 10th grade daughter and her friends joke that you won’t get into an Ivy unless you’re a straight-A student government leader who captains the debate team, chairs the food drive and digs water-wells in India during summer vacation. But they were also aghast when a straight-A track star, student newspaper editor who had actually spent her summers building huts in Namibia didn’t get into – you guessed it –Harvard. No wonder then that half of the 10th grade parents I know have already hired consultants to quarterback their children’s college applications with SAT tutoring, expert advice on the content and style of their essays, and 24/7 oversight to beat their resumes and extracurricular lives into optimal shape for USC or Princeton.

It’s hard to say which aspect of all this I find most distasteful – the “packaging”, the unseemly ambition and status-mongering, the specter of a corporate makeover for teenagers whose interests are only beginning to unfold, or the faint whiff of cheating that pervades the process.

A long time ago, I was visiting with Jeanne Lepper, Director of Stanford University’s Bing Nursery School. A toddler came into the office, carefully securing the Dutch door that separated the desks from the reception area. Jeanne beamed at her. “Thank you for shutting the door,” she said. “You’re such a competent child.” I’ve never forgotten that praise. Years later, I asked an eminent psychoanalyst what defines a successful parent. He replied that it was a parent whose child successfully lives apart from his parents in adulthood. Not a child who becomes a lawyer or a venture capitalist or gets into Harvard, simply a child who grows up to be capable of living on their own. Neither of these qualities – competence or independence -- will get you into Harvard, but think of how rare they sometimes seem these days.

So perhaps as we head into a new school year, we should reorient our expectations and think about raising competent children who can go out into the world and produce work that is the result of their true talents and capabilities, instead of hell-bent for Harvard students who feel that if cheating to succeed is what’s required, so be it. Remember – the Unabomber went to Harvard and a lot of great surgeons, CEOs, and engineers, a few U.S. Senators and -- yes, some writers, as well -- graduated from Kansas State.