It's Just A Game 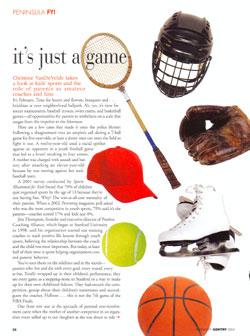 It's February. Time for hearts and flowers, bouquets and… brickbats at your neighborhood ball park. Ah, yes, it's time for soccer tournaments, baseball tryouts, swim meets, and basketball games – all opportunities for parents to misbehave on a scale that ranges from the impolite to the felonious.

Here are a few cases that made it onto the police blotter: Following a disagreement over an umpire's call during a T-ball game for five-year-olds, at least a dozen men ran onto the field to fight it out. A twelve-year-old used a racial epithet against an opponent in a youth football game that led to a brawl resulting in four arrests. A mother was charged with assault and battery after attacking an eleven-year-old because he was rooting against her son's baseball team.

A 2001 survey conducted by Sports Illustrated for Kids found that 70% of children quit organized sports by the age of 13 because they're not having fun. Why? The win-at-all-cost mentality of their parents. When a 2002 Parenting magazine poll asked who was the most competitive in youth sports, 79% said it's the parents –coaches scored 17% and kids just 4%.

Jim Thompson, founder and Executive Director of Positive Coaching Alliance, which began at Stanford University in 1998, said his organization started out training coaches to teach positive life lessons through youth sports, believing the relationship between the coach and the child was most important. But today, at least half of their time is spent helping organizations control parents' behavior.

You've seen them on the sidelines and in the stands -- parents who live and die with every goal, every round, every at bat. Totally wrapped up in their children's performance, they see every game as a steppingstone to Stanford or a way to make up for their own childhood failures. They bad-mouth the competition, gossip about their childrens' teammates and second-guess the coaches. Hellooo… this is not the 7th game of the NBA Finals.

Our front row seat at the spectacle of parental over-involvement came when the mother of another competitor in an equestrian event sidled up to our daughter as she was about to ride into the ring and tried to psych her out by saying, "It's too bad that last round was such a disaster." Should kids say that kind of thing to each other? Maybe… Competitors probably should be prepared to deal with the mind games that can go on in organized sport. But should parents engage in psychological warfare against kids who compete with their kids? No way.

Don't get me wrong, competition is not unhealthy. Victory is definitely better than defeat. It's how parents deal with the competition that is the problem. In our case, when I approached this parent about her behavior and her daughter's bullying, I was told that was simply the way the world works. Well, it's not… and if it is, it shouldn't be. Parents need to stop rationalizing that bullying, trash-talking, and cheating are just different ways to compete. There is a difference between being hungry to win and being nasty. And remember -- the children are watching and they mimic adult behavior. The child who learns to bully and cheat on the field will do it in the classroom and later in the board room or office suite.

Youth sports are a great arena for life lessons. One of the most important is focusing on mastery rather than winning. The game is about being the best you can be – and if you are really good, you'll win. Positive Coaching's Jim Thompson, who has had the opportunity to talk with the greatest coaches of the day, says that, over and over again, these men and women say winning is a byproduct. The goal is to play the best you can and winning will take care of itself.

And, by the way, the real outcome is your child's success as a student, a citizen, a friend, a parent, a person. What you should want is a child who's a winner at life.