Dive Into a Great Book 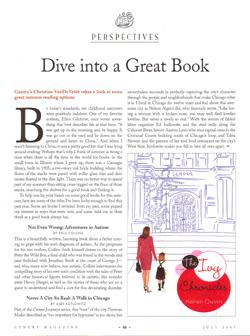 By today's standards, my childhood summers were positively indolent. One of my favorite authors, Ellen Gilchrist, once wrote something that best describes life at that time. "It was get up in the morning and be happy. It was go out in the yard and lie down on the ground and listen to China." And when I wasn't listening to China, it was a pretty good bet that I was laying around reading. Perhaps that's why I think of summer as being a time when there is all the time in the world for books. In the small town in Illinois where I grew up, there was a Carnegie library, built in 1905, a two-story red brick building where the floors of the stacks were paved with milky glass tiles and dust motes floated in the dim light. There was no better way to spend part of my summer than sitting cross-legged on the floor of those stacks, searching the shelves for a good book and finding it.

To help you lay your hands on some good books for this summer, here are some of the titles I've been lucky enough to find this past year. Some are books I revisited from my past, some piqued my interest in ways that were new, and some held me in their thrall as a good book always has.

Not Even Wrong: Adventures in Autism
by Paul Collins

This is a beautifully written, haunting book about a father coming to grips with his son's diagnosis of autism. As the prognosis for his son evolved, Collins found himself drawn to the story of Peter the Wild Boy, a feral child who was found in the woods and later frolicked with Jonathan Swift at the court of George I -- and who, many now believe, was autistic. Collins interweaves the compelling story of his own son's condition with the tales of Peter and other historical figures believed to be autistic, like outsider artist Henry Darger, as well as the stories of those who are on a quest to understand and find a cure for this devastating disorder.

Never A City So Real: A Walk in Chicago
by Alex Kotlowitz

Part of the Crown Journeys series, this "tour" of the city Norman Mailer described as "too impatient for hypocrisy" is too short, but nevertheless succeeds in perfectly capturing the city's character through the people and neighborhoods that make Chicago what it is. I lived in Chicago for twelve years and feel about this awesome city as Nelson Algren did, who famously wrote, "Like loving a woman with a broken nose, you may well find lovelier lovelies. But never a lovely so real." With the stories of fabled labor organizer Ed Sadlowski and the steel mills along the Calumet River, lawyer Andrea Lyon who tries capital cases in the Criminal Courts building south of Chicago's loop, and Edna Stewart and the patrons of her soul food restaurant on the city's West Side, Kotlowitz makes you fall in love all over again.

Rhoda: A Life in Stories
by Ellen Gilchrist

I have read every silver-tongued tale Ellen Gilchrist has ever published and this year when my daughter read one of her short stories for English class, I went back and started reading her books again. Of all her stories and novels, those featuring the character Rhoda Manning are my all-time favorites. Rhoda is kind of a red-headed, feisty, foul-mouthed version of another favorite of mine, Beverly Cleary's Ramona. This volume, the winner of the National Book Award, follows Rhoda's headstrong exploits from age eight to age sixty and if you're not captivated by her take-no-prisoners approach and southern sensibility you probably are not much fun. How could you resist the Mannings? "Everything happened to them but they always recovered," wrote Gilchrist. "They had too much character to give in to fate."

Blink: The Power of Thinking Without Thinking
by Malcolm Gladwell

This is a book that looks at instinctive decision-making, rapid cognition, and the art of "thin-slicing," filtering the factors that matter from the universe of variables. It's about how Thomas Hoving, the former director of the Metropolitan Museum, took one look at a statue and knew it was a fake -- a fact fourteen months of investigation on the part of the Getty Museum had failed to uncover. Gladwell covers a lot of ground here -- from the Pentagon's war games to facial recognition, but manages to do it in a gratifying, lucid way. I was drawn to the book's premise, because I am a notoriously bad judge of character based on first impressions and was interested in Gladwell's conclusion that we can make better decisions in the first two seconds of cognition by training our minds and senses to focus on the most relevant facts. I'll let you know…

These three books are very different pieces of fiction, but each roped me in and held me to the end. Baker Towers by Jennifer Haigh is the quiet but evocative saga of the Novak family, set in a coal mining town in western Pennsylvania at the time of World War II. Prep by Curtis Sittenfeld, the earnest coming-of-age story of Lee Fiora, an Indiana teenager who wins a scholarship to a prestigious East Coast boarding school, takes a look at status, belonging, and the anthropology of adolescence. The Ivy Chronicles by Karen Quinn is the slight, but hilarious -- and familiar -- story of a Park Avenue mom who loses her job and her husband and starts a business advising her former peers about how to get their children into the most prestigious private schools.

And, finally, if you're looking for something that's a little more substantial, but still easy to pick up and put down when you're traveling this summer, try Perfectly Reasonable Deviations From the Beaten Track: The Letters of Richard P. Feynman -- assembled by his daughter, these letters provide another look at the Nobel Prize-winning physicist and another vantage point from which to view his passion for discovery and his gift for understanding and explaining the world.