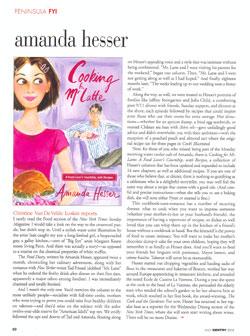 I rarely read the Food section of the New York Times Sunday Magazine. I would take a look on the way to the crossword puzzle, but didn't stop in. Until a stylish water color illustration by the artist Izak caught my eye: a long-limbed girl, a bespectacled guy, a galley kitchen, -- sort of "Big Eyes" artist Margaret Keane meets Irving Penn. And there was actually a story! Instead of a treatise on the chemical properties of white truffles.

The "Food Diary," written by Amanda Hesser, appeared twice a month, chronicling her culinary adventures, along with her romance with New Yorker writer Tad Friend (dubbed "Mr. Latte" when he ordered the frothy drink after dinner on their first date, apparently a major taboo among foodies). I was immediately charmed and totally hooked.

And I wasn't the only one. You'd mention the column to the most unlikely people -- socialites with full-time cooks, mothers who were trying to prove you could raise four healthy children on takeout -- and they'd seize on the subject with the ardor twelve-year-olds reserve for American Idol's top ten. We avidly followed the ups and downs of Tad and Amanda, floating along on Hesser's appealing voice and a style that was intimate without being confessional. "Mr. Latte and I were visiting his parents for the weekend," began one column. Then, "Mr. Latte and I were not getting along as well as I had hoped." And finally, eighteen months later, "The weeks leading up to our wedding were a frenzy of work."

Along the way, as well, we were treated to Hesser's portraits of foodies like Jeffrey Steingarten and Julia Child, a comforting post-9/11 dinner with friends, Sunday suppers, and dinners at the shore, each episode followed by recipes that could inspire even those who use their ovens for extra storage. Her directions -- whether for an apricot slump, a fried egg sandwich or roasted Chilean sea bass with chive oil -- gave unfailingly good advice and didn't overwhelm you with their ambition -- with the exception of a poached peach and almond tart where the original recipe ran for three pages in Cook's Illustrated.

Now, for those of you who missed being part of the Monday morning water cooler cult of Amanda, there is Cooking for Mr. Latte: A Food Lover's Courtship with Recipes, a collection of Hesser's columns that has been updated and expanded to include 14 new chapters, as well as additional recipes. If you are one of those who believe that, at dinner, there is nothing so gratifying as a tablemate who is a delightful storyteller, you may well feel the same way about a recipe that comes with a good tale. (And careful and precise instructions -- when she tells you to use a baking dish, she will note either Pyrex or enamel are fine.)

This cookbook-cum-romance has a number of recurring themes: what to cook when you want to impress someone -- whether your mother-in-law or your husband's friends -- and the importance of having a repertoire of recipes, dishes so well loved that you can whip them up in the kitchen of a friend's house without a cookbook in hand. But the leitmotif is the power of food to create intimacy. You will want to make her mother's chocolate dump-it cake for your own children, hoping they will remember it as fondly as Hesser does. And you'll want to feed your friends her linguini with parmesan, Meyer lemon and crème fraiche. Takeout will never be as memorable.

Hesser started out chopping vegetables and hauling sacks of flour in the restaurants and bakeries of Boston, worked her way around Europe apprenticing in restaurant kitchens, and attended the noted Ecole de Cuisine La Varenne. During a year she spent as the cook to the head of La Varenne, she persuaded the elderly man who tended the school's garden to let her observe him at work, which resulted in her first book, the award-winning The Cook and the Gardener. For now, Hesser has returned to her regular beat as a reporter for the Wednesday Dining section of the New York Times, where she will soon start writing about wines. There will be no more Diaries.

But you are going to be hearing a lot more from Amanda Hesser. Mark my words, she is food writing's Next Big Thing, joining a group -- M.F.K. Fisher, Ruth Reichl, Laurie Colwin -- that writes as much about mores and manners and people, as the daube de boeuf on the table. As the novelist and food writer Laurie Colwin once wrote, "What is more interesting than how people live? I personally cannot think of anything." I couldn't agree more. Read Cooking for Mr. Latte and you'll see what I mean.