Review: 'The Angel in My Pocket' by Sukey Forbes 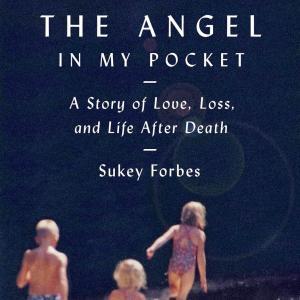 On Aug. 18, 2004, Sukey Forbes' middle child woke not feeling well. Forbes sent her two siblings off to camp and kept 6-year-old Charlotte home. They made cinnamon toast and put each other's hair up in pigtails. A few hours later, in the emergency room of Newton-Wellesley Hospital, Charlotte was dead, having succumbed to a high fever related to a rare genetic disorder.

At her daughter's bedside, the nurse asked Forbes if she wanted footprints. Yes. Handprints? Yes. "I want her pigtails," Forbes said. The nurse brought her a scissors and she carefully cut her daughter's silky blonde hair. When Forbes raised the scissors to her own pigtail, the nurse reached out and took them from her hand.

"The Angel In My Pocket: A Story of Love, Loss, and Life After Death" is the story of how Sukey Forbes went on from that moment. The path she took is heartbreaking and piteous and downright eccentric. But who is to say how you properly grieve something so horrendous? To walk along with Forbes — through pain, denial, her past, psychics, support groups, tattoos and transcendentalism — is strangely soul-soothing and ultimately heartening. You can, you see, survive. But getting there may take a while.

"The only option that resonated with me was to live. But how? How to get there from here?" writes Forbes. She reads all the books on death and dying from the ancient to the New Age. She tries group therapy but everyone there seems to be content to make grief a full-time job. The family sells their house and buys another, where they paint a mural of the exact configuration of the nighttime sky over Palo Alto, Calif., on the night Charlotte was born. They take an ill-fated family trip to Bogota, Colombia, which a friend describes as "temporary insanity in the form of a death wish." Forbes aches all over, takes up yoga and meditation, runs over the family dog, orders a dozen baby chicks through the mail and buys a new puppy.

Forbes is descended from two Boston Brahmin families: the Forbes clan made its first fortune with furs and opium in the Old China Trade, and the Saltonstalls arrived in America in 1630 (one was asked to sit as a judge in the Salem Witch Trials and resigned from the proceedings). She explores the "fringier" side of her forebears, among whom there is no shortage of spiritual seekers. She finds portents in the flickering lights of the church basement after Charlotte's funeral; in the angel of the book's title, found deep in her daughter's linen closet; and in the family ghosts of Naushon, the 6,000-acre private island off Cape Cod that has been a Forbes retreat since the 1840s. She consults with mediums and clairvoyants. "They say my daughter died, but where exactly did my daughter go?" she asks. And, strange as it may sound, we gladly follow her down this rabbit hole because what parent doesn't instinctively want — need — to know their child is safe and happy, even in the afterlife?

Ultimately, Forbes finds comfort in the beliefs and experience of her great-great-great grandfather, Ralph Waldo Emerson, the poet and essayist who founded the Transcendentalist movement of the mid-19th century and who also lost a child from a high fever at the same age as Charlotte. The Transcendentalists believed God could be found in contemplation amid nature, "that the use of natural history is to give us aid in supernatural history," writes Forbes. It's there — amid the meadows, paths, waters and family ghosts of Naushon — that Forbes finally looked "deeply enough into Charlotte's death to somehow find the gift of the loss." Today, she keeps her daughter's pigtails in a drawer of her writing desk.

For parents, to read a memoir like this might feel like dancing too close to the edge. Better not to go there. And Forbes acknowledges this. "Suffering the death of a child seems almost like a curse, or freakishly bad luck, and for those who observe it, the loss brings their own vulnerability too close to home," she writes. But don't let that stop you. This is a powerful, uplifting and fearless look at what happens to a mother when a child dies suddenly, written without self-pity. That feels like a gift.

Every parent will appreciate what Forbes has accomplished here on another level, too. It is a parent's most deep-seated wish that their children be "seen," to be known for what they bring to others in the world. With this book, 6-year-old Charlotte Saltonstall Bigham has been seen.

This article originally appeared in the Printers Row Journal of the Chicago Tribune on July 20, 2014.