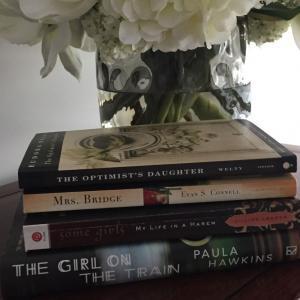 Books have been my constant companions for as long as I have memories. Here's who I've been hanging out with lately...

Some Girls: My Life in a Harem by Jillian Lauren

Never thought I would find myself reading the memoir of an 18-year-old who finds herself in the harem of the brother of the Sultan of Brunei. But when two writers I respect -- Sukey Forbes and Aidan Donnelley Rowley -- spoke highly of Some Girls, I pushed the "buy" button. This is the absolutely absorbing tale of a young woman who was so lost and yet tells a tale that so fully imparts who she was and is that I read it straight through in three days. Also, high-class prostitution, mean girls, and Bulgari. Just sayin'...

India Bridge has three children and a workaholic husband. Set in the years leading up to World War II in Kansas City, I find this book achingly nostalgic, whether for the small town Midwestern life it evokes or my memories of raising a child wih a husband who was often in Hong Kong or Switzerland!

The Girl on the Train by Paula Hawkins

Dubbed the "next Gone Girl" by reviewers and readers, Paula Hawkins' book lives up to the hype. I'm not a fan of unreliable narrators, but both these books have made me a convert -- at least when the unreliable narrator is in the hands of such skilled writers.

The Optimist's Daughter by Eudora Welty

A slim read, this book won Welty the Putlizer Prize. The simple rhythms of small town life are beautifully conveyed here, as well as the deeep relationship between a child and her parents -- both subjects for which I have a strong affinity. Also, MASTERFUL writing and an elegant examination of class.

Okay, NOT a science fiction fan. (So not a science fiction fan that my husband has been trying to get me to read The Moon Is A Harsh Mistress since we were married and I am going to read it for his 30th wedding anniversary present.) However... After trying more than once to begin this book, my friends novelist Ellen Sussman and blogger Sharon Hodor Greenthal convinced me with their raves about how they could not put it down. They were right. The premise is such a great thought experiment/writing prompt/nightmare. Irresistible!

And here's one I cannot seem to find companionship in:

All the Light We Cannot See by Anthony Doerr -- Please feel free to convince me otherwise, but I am unmoved and unmotivated to read on.